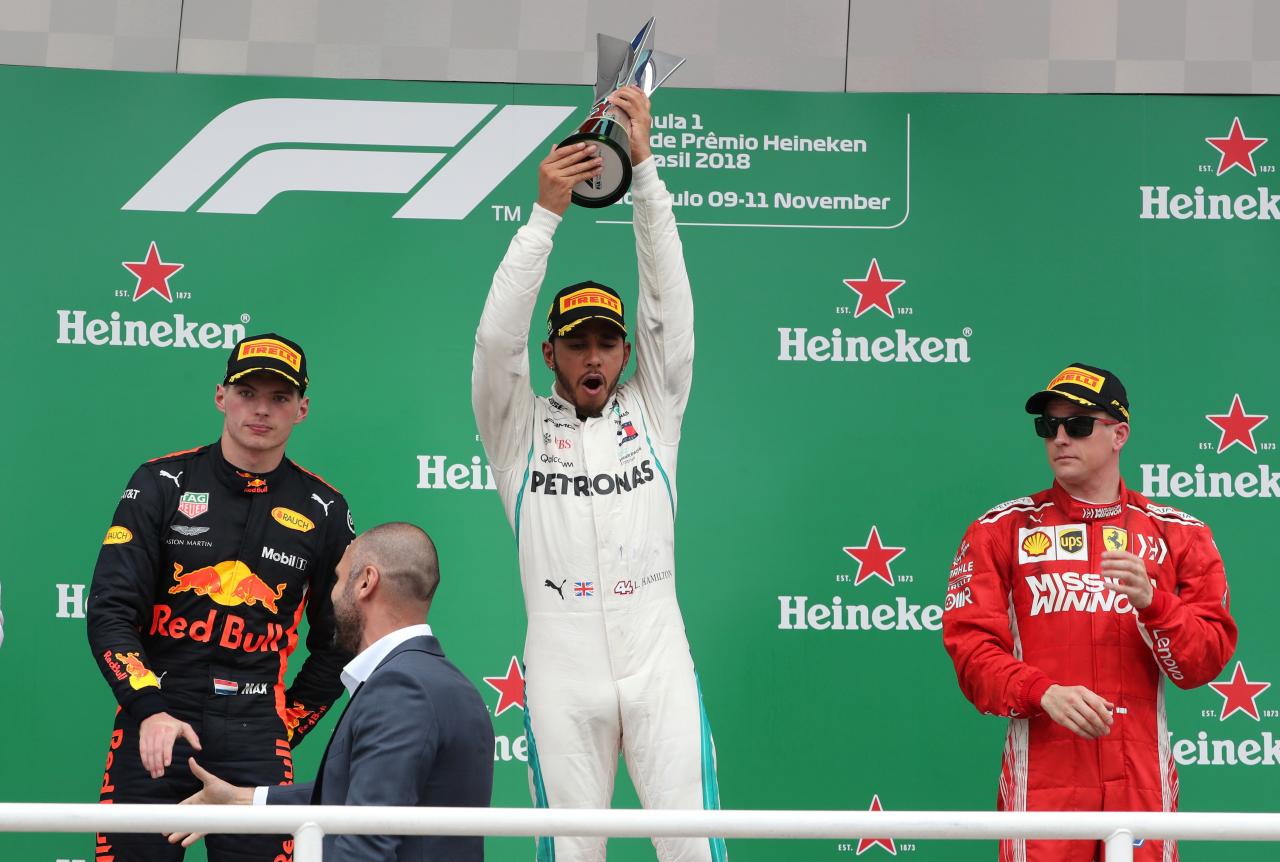 SAO PAULO (Reuters) - A lucky Lewis Hamilton won a tense Brazilian Grand Prix as his Mercedes team clinched the constructors’ title for the fifth year in a row and Max Verstappen raged at a lost opportunity. The win was the 72nd of Hamilton’s stellar career and 10th of a season that has already seen the 33-year-old Briton clinch his fifth championship, delivering Mercedes their fifth successive double. Hamilton had started on pole position but could not hold off Red Bull’s Verstappen, who led until a collision with Force India backmarker Esteban Ocon on the 44th of 71 laps sent the Dutchman into a spin and put the Mercedes driver back in front. A seething and swearing Verstappen battled back but could not close the gap, finishing runner-up 1.469 seconds adrift of Hamilton, who had never previously won in a season where he has taken the title with races to spare. Verstappen then took matters into his own hands in an angry post-race confrontation with Ocon that led to both being summoned by stewards. Ferrari’s veteran Kimi Raikkonen held off Red Bull’s Daniel Ricciardo to complete the podium on his 150th start for the Italian team. Ferrari had to score 13 points more than Mercedes to keep their hopes alive until Abu Dhabi at the end of the month but failed, with Sebastian Vettel finishing only sixth and behind Mercedes’ Valtteri Bottas in fifth. Mercedes now have 620 points with Ferrari on 553 and 43 still to be won. “That’s it. That’s the double, mate. MercedesAMG are the world champs,” Hamilton was told as he took the chequered flag at Interlagos after a race fraught with concerns about his tyres and engine. “It’s been an incredible journey with them. This is what everyone worked for, for the whole year,” said the ecstatic champion as the celebrations started with one race to go. “I’ve always told you how much of an honour it is to drive for them. Today was the best style that we could do it because we were struggling, we had problems to the end. We were a sitting duck at one stage.” Only the sport’s oldest and most succesful team Ferrari have previously managed to win five championships in a row, taking six in succession during their golden Michael Schumacher era from 1999 to 2004. “It was a very difficult season, we had up and downs. Ferrari came back very strong and Red Bull at the end but that makes the championship victory even more enjoyable,” said team boss Toto Wolff. Verstappen, winner in Mexico two weeks ago, joined Hamilton on the podium but the Dutchman knew he should have been on the top step.

The collision was the talking point of the day, with arguments on both sides. Ocon was handed a 10-second stop-and-go penalty for causing it but that came as no consolation for Verstappen, whose colourful language over the radio was largely bleeped out for television viewers. When the Dutchman found Ocon, at the post-race scales, matters became more physical with the Red Bull driver caught on television confronting the young Frenchman and giving him a shove. “You do everything well, you go through the field, we had a great car and then by such an idiot you get taken out while he’s being lapped. I have no words,” said Verstappen. “You can easily say afterwards that I have much more to lose than him but I’m just trying to do my race. Suddenly, a backmarker is trying to race you and taking a stupid risk to dive inside. What can I do about it? “The penalty for me is that I lost the victory but hopefully in 15 years’ time we can laugh about it.” Sauber’s Ferrari-bound rookie Charles Leclerc was ‘best of the rest’, the Monegasque finishing seventh after running as high as fourth during the pitstops. Haas savoured a double points finish to close on fourth-placed Renault, with Romain Grosjean eighth and Danish team mate Kevin Magnussen ninth. Ocon’s Mexican team mate Sergio Perez took the final point for a team that had hoped for much more.