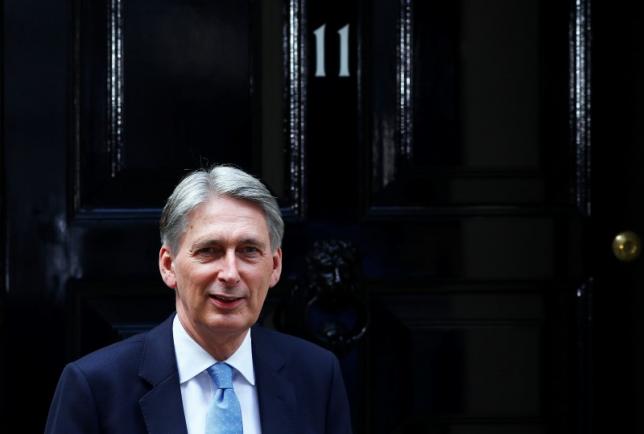 LONDON – The new Chancellor Philip Hammond will this week face calls from anxious peers around the world to explain how his country can pull off a smooth exit from the European Union and minimise the damage to the fragile global economy. A month after the Brexit shock hammered markets and added to the prospect of more stimulus from major central banks, Hammond will attend a July 23-24 meeting of finance chiefs from the Group of 20 leading economies in the Chinese city of Chengdu. There, the former foreign minister is likely to come under pressure to provide clarity on Britain's strategy for leaving the EU and negotiating a new trade deal. The process is likely to take years and could put fresh strains on Europe's economy, which has barely recovered from the euro zone debt crisis. U.S. Treasury Secretary Jack Lew visited Britain twice last week, as the country changed prime ministers as well as finance ministers, to say a deal that tightly bound Britain and the EU was "in the best interests of Europe, of the United States and the global economy." A Canadian finance ministry official said Brexit and its implications for public support for international trade would dominate the G20 gathering. The shock "Leave" victory in Britain's June 23 EU membership referendum has underscored the deep dissatisfaction among many voters in rich countries with the globalised economy. That is something that the anti-free trade U.S. Republican candidate Donald Trump hopes will boost his chances in November's presidential election. It also adds to the challenge for the G20 finance ministers and central bank governors to steer the world economy out of a slow-growth rut that has lasted since the financial crisis. Hammond said on Tuesday the Bank of England would take the first steps to help steer the economy through its Brexit shock, and possible budget measures would not come until later this year. FORCES OF DIVISION The International Monetary Fund said on Tuesday it had been planning to raise its forecasts for global growth until Brexit threw "a spanner in the works" and prompted the Fund to trim its forecasts. It said the outlook would be a lot worse if Britain failed to strike a friendly deal with the EU. "Brexit is symptomatic of a broader threat to the global economy," Lena Komileva, managing director of G+ Economics, a consultancy. "The forces of division are threatening the forces of cohesion and that makes coordinating growth policies harder." George Magnus, a senior economic adviser to UBS, said Hammond - who supported Britain staying in the EU - would be pressed to provide some of the missing detail behind new Prime Minster Theresa May's promise that "Brexit means Brexit." "There will be a strong interest on the part of the Europeans and with varying degrees the U.S., China and India and other important countries, who will want an idea of the dynamic implications that Brexit might have for the EU itself," he said. However, with even the start date for Britain's exit process unclear, Hammond will probably be unable to provide much detail to his peers, Magnus said. Although he is little known to many other finance ministers, Hammond is no stranger to international gatherings, having served as Britain's defence and transport minister as well as its foreign minister for the last two years. He has suggested that Britain, which now faces the risk of a recession, will take more time to fix its public finances than under his predecessor George Osborne, whose focus on bringing down the budget deficit brought him into conflict with the IMF in 2013. That change in stance is likely to be applauded by the United States, which has long urged other G20 members to do more to boost growth by increasing public spending. However, Hammond has limited room because Britain's budget deficit of 4 percent of economic output is one of the highest among rich economies. Before attending the G20 meeting in Chengdu on Saturday and Sunday, Hammond is due to meet Chinese government officials in Beijing on Friday. Osborne prioritised Chinese investment, and Hammond is likely to stress that Britain is "open for business." –Reuters