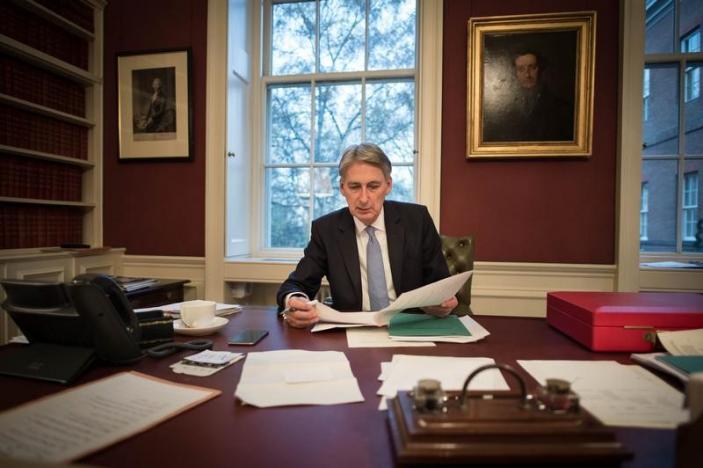 LONDON - Britain's Chancellor will say on Wednesday that he is raising the minimum wage and taking the edge off a benefits squeeze for low earners, but fixing the public finances will be a bigger priority as the country gets ready for Brexit. In the first detailed economic policy announcement of the new government at 1230 GMT, Philip Hammond will focus on tackling a still large budget deficit and injecting dynamism into the world's fifth-biggest economy, his office said. When he became Chancellor in July, a few weeks after the vote to leave the European Union, Hammond said Britain might need a "fiscal reset," raising the prospect of a big shift in economic policy towards more public spending or large tax cuts. But so far, the economy has held up better than expected to the initial Brexit shock and Hammond has said he wants to keep his powder dry for tougher times that probably lie ahead as Britain proceeds with its divorce from the EU. The Treasury said that the minimum wage, known as the National Living Wage, would rise to 7.50 pounds an hour from April. That is up from 7.20 pounds now, but represents only a small step towards an existing target of 9 pounds by 2020. The Treasury also said in a statement that low-paid workers would lose tax credits at a slightly slower pace as their earnings rise, softening some of the impact of a sharp rise in inflation caused by the Brexit hit to the pound. In another attempt to address the frustrations of "just about managing" families, many of whom voted for Brexit and who have been promised help by Prime Minister Theresa May, Hammond will take steps to make more homes available to low-income renters and buyers. The government will earmark 1.4 billion pounds of new funding to help build 40,000 new homes over the next five years, the Treasury said. There will also be a crackdown on fees imposed on tenants, a bitter complaint of many renters. The opposition Labour Party said the measures were "too little, too late" to help hard-up families, whose incomes have stagnated for a decade. Torsten Bell, director of the Resolution Foundation, a think tank which focuses on issues facing low-earning households, said of the benefits change in a Tweet: "All support for just managing families is to be welcomed but after this small tweak they will still be the big losers over next few years." "HIGHLY CONSTRAINED" Alongside the measures to help low earners, the Treasury said Hammond would emphasise that the best way to improve living standards was by fixing the public finances and boosting Britain's low productivity growth. His predecessor George Osborne brought the budget deficit down from 10 percent of gross domestic product in 2010 to 4 percent in the financial year which ended in March. But it remains among the highest of the world's rich nations and Hammond has said public debt levels, equivalent to 84 percent of GDP last year, are "eye-wateringly large". Although he has dropped Osborne's target of turning the deficit into a surplus by 2020, Hammond has stressed he will not go soft on the public finances. "This economy does need investment but it also needs us to maintain credibility with markets," he told ITV television on Sunday. "We are highly constrained in how we can approach this. We need to do it cautiously and appropriately." Britain's budget forecasters are likely to say the government will have to borrow around 100 billion pounds more over the next five years than they forecast in March, mostly because of Brexit, according to forecasts by economists. The Office for Budget Responsibility is also expected to chop its forecasts for economic growth in the coming years. Despite the bleak outlook, the forecasts could bolster Hammond's argument that Britain must consider all options for its future relationship with the EU. Other ministers have proposed a tougher approach to the Brexit negotiations, raising the prospect of more restrictions for exporters and unsettling investors who have pushed down the value of pound further in recent weeks. On productivity, the Treasury said Hammond would announce billions of pounds' worth of help for research and development. In the run-up to Wednesday's announcement, Hammond has also announced new funding for road building and broadband networks. Economists fear that the economy's ability to grow could be further limited if Brexit hurts corporate investment and the flow of skilled workers to Britain. -Reuters