LAHORE (92 News) – Punjab Assembly Speaker Pervaiz Elahi on Thursday claimed that Opposition Leader in Punjab Assembly Hamza Shehbaz had attempted to strangle some lawmakers in the House. Talking to the journalists outside the Punjab Assembly, the speaker said that he already bore the hooliganism by the Pakistan Muslim League-N (PML-N) members’ four time. “The PML-N created chaos during the first session of the Punjab Assembly and resorted to hooliganism when the provincial chief minister was elected and now for a fourth time have caused disruption,” he mentioned. He said that Hamza Shehbaz tried to invoke his party members to strangle or torture on other lawmakers in the house. He added that he [Hamza] is like a child. “If a child is stubborn, those standing next to him should explain to him what is right,” he said. “Opposition should learn manners on how to talk,” Elahi further said and added that an investigative report regarding vandalism of provincial assembly property will be presented before the Parliament. Further, Elahi said they are getting investigations conducted into projects initiated by the previous government. 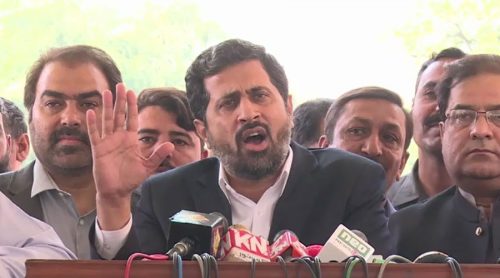 On the occasion, Punjab’s Information Minister Fayyazul Hassan Chohan said that the accountability to continue across the board without any discrimination and no NRO will be offered. The minister said that Hamza Shehbaz Sharif is busy in covering wrongdoings of his family. The minister appealed opposition’s lawmakers to rejoin the ongoing session of the assembly, “PML-N is unable to accept Pervez Ellahi as speaker of the Punjab Assembly.” Taking a jibe at JUI-F chief Maulana Fazlur Rehman, Chohan said that he is convener of the ‘All Pakistan Loot Maar Association’, opposition is gathering under one umbrella just to exert pressure on the incumbent government to stop ongoing accountability process, he continued. Terming Prime Minister Imran Khan’s Saudi visit successful, Chohan said economic situation will improve soon.