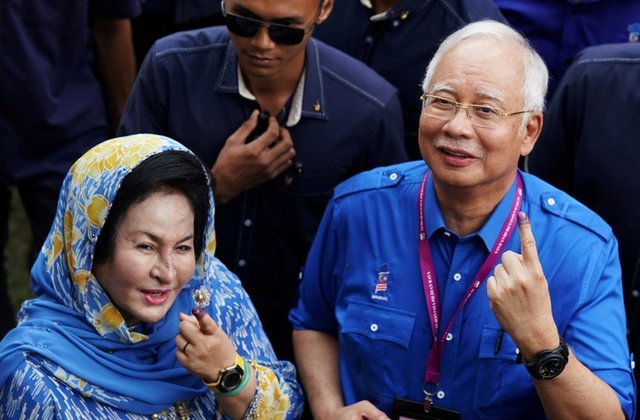 KUALA LUMPUR (Reuters) - In early 2015, as Malaysians were protesting over government plans to introduce a consumption tax, the then first lady was complaining about the rising costs of her hairdresser. Rosmah Mansor lamented in a speech at a public forum on the implementation of the tax that she had to pay 1,200 ringgit ($300) for one hair-dyeing session, at a time when the minimum wage job in Malaysia paid 900 ringgit a month. Rosmah’s comments angered many Malaysians, who had already noticed her luxury watches and handbags in public appearances with her husband Najib Razak, who was ousted as prime minister in an election on May 9. But with tight controls on the media, there was little open criticism of her lavish lifestyle. Now, after Friday’s seizure by police of hundreds of bags, including expensive Hermes ones, and a stash of jewellery from apartment units where Najib’s family was living, public attention is focusing on Rosmah. An unshackled media and many Malaysians are openly demanding to know how Rosmah was able to afford an opulent lifestyle. Many have compared her with Imelda Marcos, who left behind more than 1,200 pairs of shoes when her husband Ferdinand Marcos was ousted as president of the Philippines in 1986. Rosmah has long defended her tastes. “There are some accessories and clothes that I have bought with my own money. What is wrong with that?,” Rosmah, 66, was quoted as saying in an authorised biography published in 2013, when asked about criticism over her opulent lifestyle. “As a woman and as the wife of a leader, I have to look made up, neat and take care of my appearance. It is also embarrassing for Malaysians when other countries make fun of the sloppy wife of Malaysia’s prime minister,” she said. Rosmah, through her law firm, issued a statement to address “the recent spate of events leading to the media hailstorm” and asked authorities to follow the rule of law and due process to avoid a premature public trial. She said the inquiry process seemed to have been compromised due to leaks, including “details of the alleged items confiscated”. Her law firm and aides did not respond to further queries from Reuters. Since Najib was defeated in the election by his mentor-turned-rival, Mahathir Mohamad, he has become the subject of a money-laundering probe and, along with Rosmah, has been barred from leaving the country. The new government is investigating allegations of fraud and corruption at the state fund 1Malaysia Development Berhad (1MDB), which was founded by Najib. US authorities say the former prime minister received nearly $700 million of funds diverted from the fund. Najib has denied wrongdoing. Nearly 300 boxes of designer handbags and dozens of bags filled with cash and jewellery were among the items taken away by police this week from the properties linked to Najib’s family. Items such as Birkin handbags from Hermes and watches were among the items seized, police said. The police did not say who the bags belonged to. Birkin bags, favoured by celebrities like Victoria Beckham, can be worth up to hundreds of thousands of dollars. The seizure before dawn Friday came hours after a photo of Mahathir reportedly wearing what appeared to be $3 Bata sandals went viral on social media, drawing comparisons between the two leaders. Local media reports said 52 designer handbags with brand names like Chanel, Louis Vuitton and Oscar de la Renta were also seized from Najib’s private residence, along with 10 luxury watches. The US Department of Justice alleged in civil lawsuits last year that some of the funds stolen from 1MDB were used to buy jewellery for Rosmah: $27 million for a rare pink diamond and another $1.3 million for 27 gold necklaces.

“I AM NOT PERFECT”

Rosmah’s beginnings were humble. She was born in 1951 in Kuala Pilah, a small town in Peninsular Malaysia’s southwestern state of Negeri Sembilan. According to her 2013 biography, she studied sociology and anthropology at a local public university, before pursuing a masters degree at Louisiana State University in the United States. In her biography she mentions her financial difficulties as a student and in her first job at an agriculture bank, where she earned 800 ringgit a month. She stopped working in 1987 to focus on starting a family with Najib, who was then Malaysia’s youth and sports minister, according to the biography. After Najib became prime minister, Rosmah focused on charity work, providing aid to underprivileged children, women’s support groups and health and sports advocacy. A day after the US allegation last year over Rosmah’s $27 million purchase of a pink diamond, her lawyers issued a notice threatening to sue anyone who produced “false, malicious publications or posting” against her. In the last pages of her biography, Rosmah asks for Malaysians to accept her as she is. “I hope people accept the reality that I am a regular human being. I am not perfect.”