The remarkable naval action took place a few miles South-East off ‘Diu Head’ on the west coast of India.

The Hangor submarine remained underwater for a long time and successfully returned harbour on December 13 – 1971 after completion of the mission. The event is distinguished in naval history as being the first successful kill by a submarine since WW-II.

In recognition of their courage, the valiant crew of HANGOR was decorated with 04 x Sitara-e-Jurrat, 06 x Tamgha-e-Jurrats and 14 x lmtiazi Asnad, the spokesperson of Pakistan Navy said. This is the highest number of operational gallantry awards received by a single unit of Pakistan Navy. http://youtube.com/watch?v=WPe6tyTsFK4 The ceremony was held at Pakistan Maritime Museum (PMM) at Karachi, adjacent to Ex-PNS/M HANGOR which was converted to serve as a museum submarine and placed at PMM as a symbol of courage and victory. Vice Admiral (Retd) Ahmed Tasneem graced the occasion as chief guest. Upon his arrival, Commander Karachi Rear Admiral Zahid Ilyas received the chief guest. Vice Admiral (Retd) Ahmed Tasneem, while addressing the occasion, said that Hangor remained a pride for Pakistan Navy in 1971 war and her heroic actions not only resulted in sinking of Indian Navy’s frigate but this was a strategic overture of Pakistan Navy which effectively thwarted and marginalised Indian aggression. 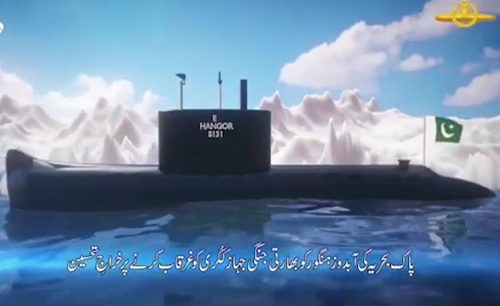 The chief guest also highlighted that the moment KHUKRI went down, it crippled Indian Navy’s morale and its nefarious designs. The sinking had perpetrated the largest number of causalities to the Indian Navy during 1971 war. He paid rich tribute to heroic actions of Pakistan Navy submarine Ghazi which was deployed off Vishakhapatnam. Fearing PNS/M GHAZI, the Indian Navy had moved its Aircraft Carrier INS VIKRANT, further eastward to Andaman Island; much away from the scene of action and thus remaining ineffective throughout the war. On the occasion of Hangor Day, Pakistan Navy also released a special documentary and promo depicting the heroics of PNS Hangor. Students of Bahria College have also participated in other activities including national song and colourful performances in connection with the day. Subsequent to the address, the guests were invited to visit ex-PNS/M HANGOR to revive their golden memories. The ceremony was attended by the veterans of the submarine and a large number of senior serving and retired Naval officers.