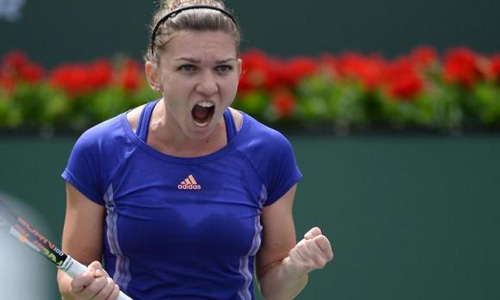 MIAMI - World number three Simona Halep says it is hard to imagine reaching the top of the world rankings as long as Serena Williams is playing the game but believes she has what it takes to win a grand slam. The Romanian arrives in Florida for this week's Miami Open off the biggest success in her career with a victory over Jelena Jankovic in the final of the BNP Paribas Open at Indian Wells on Sunday. The win was the third of the year for the 23-year-old following victories at Shenzhen and Dubai and while she is firmly entrenched as number three, behind Williams and Maria Sharapova, she says getting to top spot may be a step too far. “When Serena is number one, its hard to think of being number one," Halep told reporters on Tuesday. "But still I have confidence that I can win more titles and reach a higher ranking." The Miami Open has almost become the personal property of the Williams sisters, who live in nearby Palm Beach Garden and have won the event 10 times, Serena lifting the title on seven occasions and Venus three. Still, Halep, who has never ventured past the third round in Miami, doesn’t believe that Williams is unbeatable. “She (Serena) is very strong, she is a great champion, she has been up there for many years. She knows how to manage every situation," praised Halep. "I admire her a lot and learnt many things from her. "After the first match at Indian Wells I told my coach that I really wanted to play her in the semifinals but it didn’t happen because of her injury. “I really want to meet her many times, because I become stronger after I play her,” she added. Halep has her eyes on becoming the first Romanian woman since her manager, Virginia Ruzici, French Open winner in 1978, to secure a grand slam title. “I can say I feel ready because I just won a premier tournament which is almost like a grand slam," said Halep. "But still I am very far and I just want to be very focused. “My dream is to win a grand slam, I don’t know if it will happen in this life. But I just want to work hard every day to reach a (major) title,” she said. Halep’s climb up the rankings has attracted little fanfare but she laughs at the idea that she is a ‘rising star’ in the game. “I’m not young," smiled the 24-year-old Romanian. "I am already older, I am used to being in the top, I have a year there, I have experience and feel ready to play with everyone at every tournament." - REUTERS