Hariri back in Lebanon for first time since quitting as PM 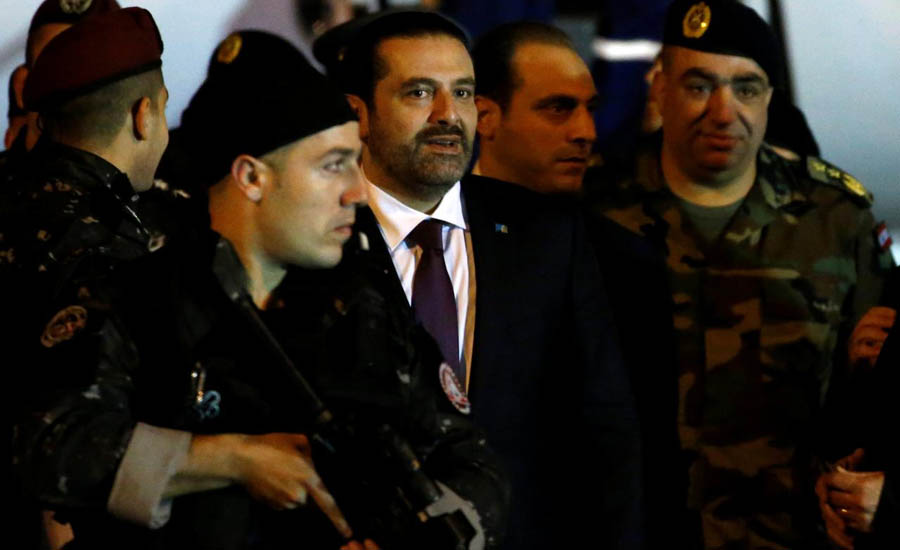 Hariri back in Lebanon for first time since quitting as PM

BEIRUT (Reuters) - Saad al-Hariri returned to Beirut on Tuesday for the first time since he resigned as prime minister in a statement delivered from Saudi Arabia that plunged Lebanon into crisis. Hariri’s sudden resignation on Nov. 4 thrust Lebanon to the forefront of regional tussle between the Sunni monarchy of Saudi Arabia and Shi‘ite Islamist Iran, whose powerful Lebanese ally Hezbollah is part of the Beirut government. Hariri, a long-time ally of Saudi Arabia, cited fear of assassination and meddling by Iran and Hezbollah in the Arab world in his resignation speech. The move caught even his aides off guard, and Lebanese state officials and politicians close to Hariri say Riyadh forced him to quit and held him in Riyadh. Riyadh and Hariri have denied this. Lebanese President Michel Aoun, who dispatched envoys to urge foreign states to secure Hariri’s return from Saudi Arabia, has refused to accept the resignation until he returns to present it in person. Hariri drove straight from Beirut airport to read a prayer at the grave of his father, Rafik al-Hariri, whose 2005 assassination forced him into politics. Asked if had a message for the Lebanese, who have largely united in demanding his return, Hariri said: “Thank you”. Hariri is expected to take part in Lebanese independence day celebrations on Wednesday. Earlier, Hariri met Egyptian President Abdel Fattah al-Sisi in Cairo, saying after the meeting that he would announce his “political position” once he got to Lebanon. It is not yet clear if he will stick by the resignation or rescind it. In a Nov. 12 interview from Saudi Arabia with a TV station that he owns, Hariri said he would return to Lebanon to confirm his resignation. But he also held out the possibility of withdrawing it if Hezbollah respected Lebanon’s policy of staying out of regional conflicts, notably Yemen. Following an intervention by France, Hariri departed Riyadh for Paris at the weekend. He flew into Beirut from Cyprus where he stopped for a 45-minute meeting with President Nicos Anastasiades. In his meeting with Egypt’s Sisi, Hariri said he discussed Lebanon’s stability and the necessity of keeping the country out of “all regional politics”. AOUN WARNS ARABS NOT TO PUSH LEBANON TOWARDS “THE FIRE” Hezbollah leader Sayyed Hassan Nasrallah, who also called for Hariri’s return, said on Monday his group was open to “any dialogue and any discussion”. Nasallah also issued his clearest denial yet of any Hezbollah role in Yemen, where a Saudi-led coalition is fighting Iran-allied Houthi forces. If Hariri affirms his resignation, Aoun will consult MPs on their choice for the next prime minister. He is obliged to nominate the candidate with the greatest support. Political sources expect Hariri to be nominated prime minister once again. Following Hariri’s resignation, Saudi Arabia accused the entire Lebanese government - not just Hezbollah - of declaring war against it. Western governments including the United States have struck a different tone, however, affirming their support for Lebanon and the stability of a country that is hosting 1.5 million Syrian refugees - equal to one-in-four of the population. “We stand firmly with Lebanon and will continue supporting your country’s efforts to safeguard Lebanon’s stability, independence, and sovereignty,” US President Donald Trump said in a national day message to his Lebanese counterpart. In his Nov. 12 interview, Hariri warned Lebanon was at risk of Gulf Arab sanctions because of Hezbollah’s regional meddling. He indicated the livelihoods of hundreds of thousands of Lebanese in the Gulf could be at risk, as well as trade, vital to the stability of the Lebanese economy. In a speech on the eve of independence day, Aoun told Arab states that dealing with Lebanon required “wisdom” otherwise the country would be pushed “towards the fire”. Aoun’s warning followed an Arab League meeting on Sunday whose closing communique condemned Hezbollah for “supporting terrorism” and noted that it was part of the government. “My message to the Arab brothers: Dealing with Lebanon requires a lot of wisdom and rationalism, and the alternative to that is pushing it towards the fire,” Aoun said.