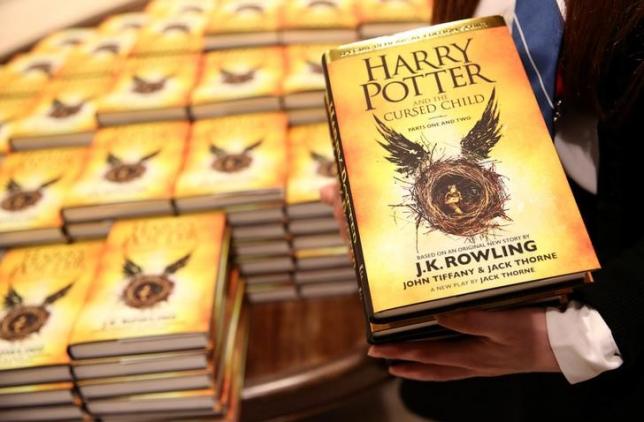 LONDON – "Harry Potter and the Cursed Child", the script for a new London play telling the eighth story in the hugely popular boy-wizard series, has sold more than 680,000 print copies in the UK in three days, publisher Little, Brown Book Group said on Wednesday. The book - a script and not a narrative novel like author J.K. Rowling's previous Potter books - was published at midnight on Sunday, shortly after the play's gala opening. It is set 19 years after "Harry Potter and the Deathly Hallows", which was released in 2007 and the final book in the original series. UK book industry magazine and website The Bookseller said if the sales rate continued, the script book would "be the second biggest-selling single week for one title since records began, with 'Harry Potter and the Deathly Hallows' as the first". That book sold 1.8 million copies and 780,000 units of the adult edition in the UK in its launch week, it added. Bringing back Rowling's enchanted world of witches and wizards, "Harry Potter and the Cursed Child" features the lead character as a father of three and an overworked employee of the Ministry of Magic. "After just two days' sales (it) is already our biggest-selling hardback since Dan Brown's 'The Lost Symbol' in 2009," Kate Skipper, buying director at UK bookstore chain Waterstones, said in a statement. "By the end of this first week, we expect to exceed 'The Lost Symbol' sales and to match the lifetime sales of our bestselling script book ever 'An Inspector Calls' by J. B. Priestley. There's no doubt about it; this will be our biggest book of the year." The play is based on a story written by Rowling, screenwriter and playwright Jack Thorne and director John Tiffany. Last week, Barnes & Noble said the script book was the US retail book sellers' most pre-ordered book since "Harry Potter and the Deathly Hallows". –Reuters