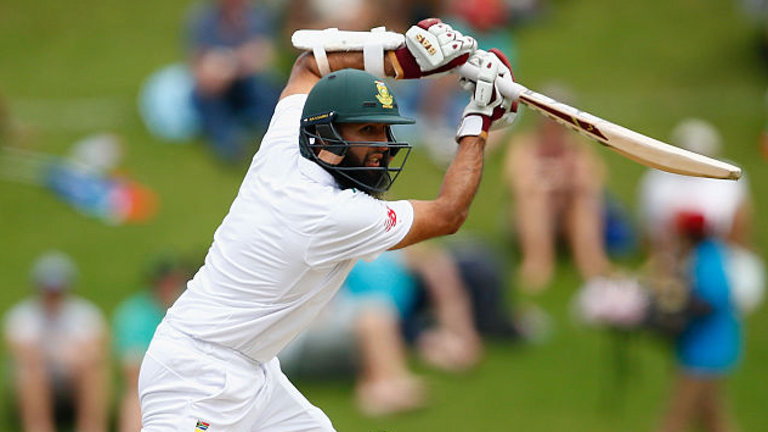 COLOMBO (92 News) – South Africa are up against it in the first of two Tests against Sri Lanka, well behind and with a lot of catching up to do after two days of play in Galle.
Sri Lanka rode on Dimuth Karunaratne’s 158 to put up 287 in their first innings and then bowled the visiting side out for 126 with Dilruwan Perera picking up 4/46. They have since stretched their lead to 272 after ending the second day on 111/4 in their second innings. “Yes, 272 runs on that type of wicket is a lot of runs,” Hashim Amla, who was dismissed for 15, said after the second day’s play. “If we can look to restrict them under 320 it will be a good target for us. If we can get a few good partnerships and one of us plays an innings like Karunaratne played, it will get us close to that score. “Any of the batsmen in the top six would love to occupy the crease for a long time to score the runs and to get us to the total we have to chase. Myself and everyone else would like to get stuck in and bat for as long as possible.” While Perera was the main threat for the South Africans, Rangana Herath returned 2/39 and Lakshan Sandakan 1/18, the spinners accounting for seven wickets as Suranga Lakmal, the lone pacer in the side, picked up three wickets in 4.3 overs, including that of Faf du Plessis, the top scorer with 49. “It is a tough wicket, you have to capitalise on the loose balls when you do get them and hope that the ball doesn’t have your number on it. You always have to have the intent when you are batting,” said Amla. “You have to have decent defence to keep out the good ball, and you have to look to score. If you can combine those two, with a bit of fortune, it gives you the best chance of scoring.” Amla, who was a part of the last South African touring side to Sri Lanka in 2014 and scored a solid 139* in the second Test – it was drawn, and South Africa won the series 1-0 – didn’t want to blame the batsmen for their dismissals on the second day. “The way everyone played, to be honest, I feel they applied themselves as best as they can,” he said. “Batters from both teams have found it difficult to bat, barring one or two batsmen, so going into the second innings we have to keep playing with good intent and keep learning. “We have played in conditions like this before and the scores are low, you don’t get scores of 350 and above. You take some learning from it but you have to play the way the pitch allows you to play.”