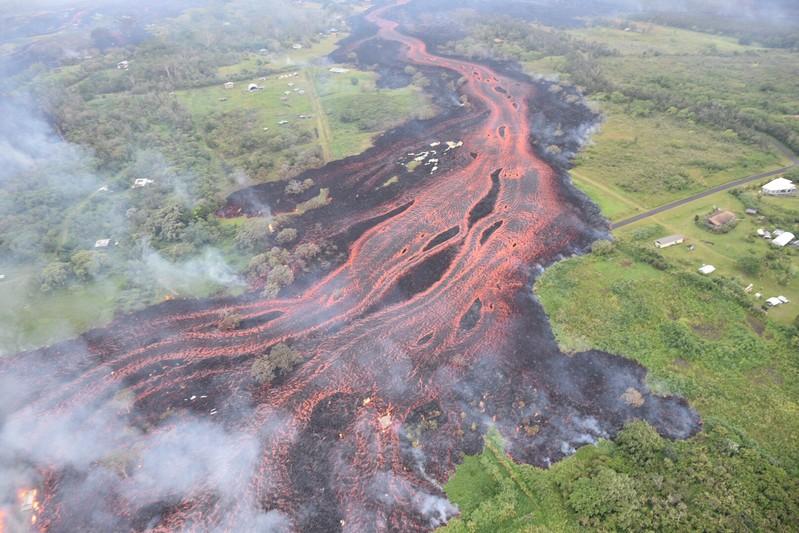 PAHALA  (Reuters) - The restive Kilauea Volcano belched clouds of ash into the skies over Hawaii’s Big Island twice more as civil defense authorities reported that pressurized geothermal wells at a nearby power plant had been spared from approaching lava. The latest back-to-back upheavals of ash from the main summit crater of Kilauea — one before dawn and another several hours later — came on the 21st day of what geologists rank as one of the biggest eruption cycles in a century from one of the world’s most active volcanoes. The earlier ash plume rose to a height of 8,000 feet (2,438 meters), while the later one reached about 5,000 feet (1,524 meters), authorities said. Intermittent explosions of ash from the summit, believed to be driven by underground bursts of steam deep inside the throat of the crater vent, are occurring about twice a day, with smaller blasts in between, US Geological Survey (USGS) vulcanologist Wendy Stovall told reporters. The Hawaii County Civil Defense agency warned in its latest bulletin that residents downwind of Kilauea should take care to avoid exposure to ash, which can cause eye irritation and breathing difficulties, particularly in people with respiratory problems. “The ash has just been nonstop every day since the summit has been erupting,” said Tiahti Fernandez, 24, as she sat in a car parked outside her father-in-law’s home in the tiny farming village of Pahala, 26 miles (42 km) southwest of the summit crater. “Every day we have to wash our cars and wash down the patio because the ash just covers everything,” she said over the crowing of four roosters tethered to a chicken coop in the yard. “The air quality has been so bad that everybody has been walking around with a (dust) mask.” A fine layer of brownish-gray ash coated vehicles and other surfaces, and an ash plume rising from the volcano summit was visible in the distance through the hazy air. Emissions of sulphur dioxide gas, harmful if inhaled, also remained at high levels from newly opened lava-spewing fissures in the ground running through populated areas on the eastern flank of the volcano, authorities said. “Residents in the affected area should be prepared to take leave of the area with little notice due to gas or lava inundation,” the civil defense bulletin warned.

One potential hazard that appeared to have been brought under control was at the Puna Geothermal Venture (PGV) plant, which provides about a quarter of the Big Island’s electricity. Lava from an active fissure nearby had flowed onto the property early this week, posing the risk of toxic gases being released in the event molten rock encroached into any of several pressurized deep-underground wells. Utility crews racing to quench the wells with cold water and plug them with mud had managed to mostly secure the site. The civil defense agency reported , “there is no immediate threat to any of the wells at PGV.”
The facility also received a respite from Mother Nature. Accumulations of cooled, hardened lava created a thick, 30-foot (9.14-meter) high wall of solid volcanic rock channelling fresh lava streams from fissures to the south, away from the PGV plant, USGS scientists said. Authorities also were monitoring hazards from noxious clouds of acid fumes, steam and fine glass-like particles — called laze — emitted when lava flows pour into the ocean on the island’s southern end. Laze — a term combining the words “lava” and “haze” — is formed when molten lava, reaching temperatures of 2,000 degrees Fahrenheit (1,093 Celsius), reacts with sea water. Although potentially fatal if inhaled, Stovall said the danger was confined to the immediate vicinity of laze plumes themselves. Kilauea rumbled back to life on May 3 as it began extruding lava and sulphur dioxide emissions through a series of fissures, marking the latest phase of an eruption cycle that has continued nearly nonstop for 35 years. The occurrence of new lava vents, now numbering about two dozen, have been accompanied by earthquakes and periodic eruptions from the summit crater. At least 44 homes and other structures have been destroyed, and a man was seriously injured on Saturday when a chunk of lava shot out of a fissure and struck him in the leg. Some 2,000 people remain under evacuation orders due to lava flows and sulphur dioxide gas. Civil defense officials said contingency plans for further evacuations were being prepared with National Guard officials in case they become necessary.