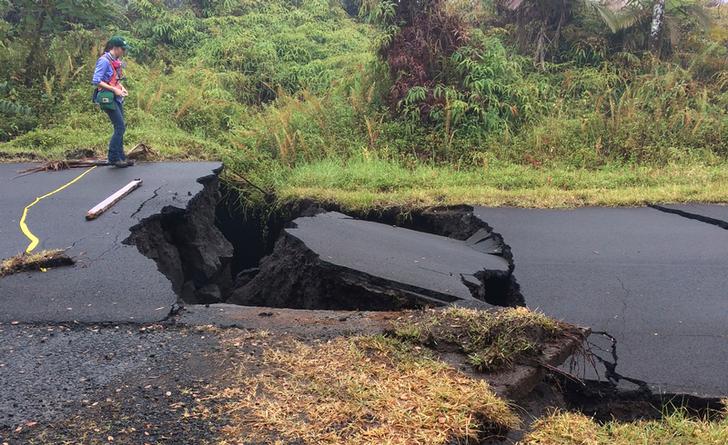 PAHOA  (Reuters) - Hawaii’s Kilauea volcano spewed ash nearly six miles (9 km) into the sky  and scientists warned this could be the first in a string of more violent explosive eruptions with the next possibly occurring within hours. “This has relieved pressure temporarily,” US Geological Survey geologist Michelle Coombs told a news conference in Hilo. “We may have additional larger, powerful events.” Residents of the Big Island were warned to take shelter from the ash as toxic gas levels spiked in a small southeast area where lava has burst from the ground during the two-week eruption. The wind could carry Kilauea’s ash plume as far as Hilo, the Big Island’s largest city and a major tourism centre, the County of Hawaii Civil Defense warned in an alert. “Protect yourself from ash fallout,” it said. Some Big Island residents had feared “the big one” after Kilauea shot anvil-sized “ballistic blocks” into the visitors’ car park on Wednesday and was rocked by earthquakes that damaged buildings and cracked roads in the park that was closed last week. But geologists said the 4:15 a.m. (10:15 a.m. EDT) explosion was not particularly large and on a par with the last series of steam-driven blasts, which took place in 1924. “The activity is such that they can occur at any time, separated by a number of hours,” Hawaiian National Volcano Observatory Deputy Scientist-In-Charge Steve Brantley told reporters on a conference call. Geologists said it was extremely unlikely Kilauea would have a massive eruption like that of 1790 which killed dozens of people in the deadliest eruption to occur in what is now the United States. Kilauea’s falling lava lake has likely descended to a level at or below the water table, allowing water to run on to the top of its lava column and create steam-driven blasts, they said. “I don’t think there is a big one that’s coming,” said University of Hawaii vulcanologist Scott Rowland. “I think it’s going to be a series of explosions similar to the one that happened this morning, and that’s based on what happened in 1924, which is really our only analog,” he said of the nearly century old event, which lasted 2-1/2 weeks and killed one person who was hit by a “ballistic block.” A  21st fissure also opened in Leilani Estates while other fissures reactivated with lava, the Hawaii Civil Defense said in an alert.

A spike in toxic sulphur dioxide gas levels closed schools around the town of Pahoa, 25 miles (40 km) east of the volcano, where lava from giant cracks has destroyed 37 homes and other structures and forced about 2,000 residents to evacuate. A change in wind direction caused gas spewing from fissures to drift northwest towards Pahoa, prompting National guard troops to don gas masks at a nearby road intersection, according to a Reuters reporter. Pahoa fire station recorded a “red level” of sulphur dioxide, meaning the gas would cause choking and an inability to breathe, Fenix Grange of the Hawaii Department of Health told a news conference in Hilo. “If it’s red, it’s get out of Dodge,” she said. There have been no deaths or serious injuries reported during the current eruption. Civil defence workers handed out one ash mask per family member in communities close to Kilauea to protect residents from the powdered rock, which is not poisonous but causes irritation to eyes and airways. Volunteers handed out some 5,000 dust masks in less than three hours in the community of Kea’au, north of Pahoa at one of the four distribution points that were opened. “It was just thick, eyes watering kinda stuff,” said Glenn Severance, 65, a resident of Hawaii Paradise Park. “I just wanted to have something,” said Severance, adding he knew the mask would not protect against toxic volcanic gases. An aviation red alert was in effect due to risks ash could be carried into aircraft routes and damage jet engines, USGS said. Passenger jets generally cruise at around 30,000 feet. Across the Big Island, home to 200,000 residents, people were encouraged to take caution driving, as ashfall can make roads slippery, and not go outdoors unless necessary. But by 1:30 p.m. (7:30 p.m. EDT) reported ashfall was limited to only light, wet deposits about 3-4 miles (5-6 km) northwest of the summit, as rain over the volcano curbed the spread of ash. Eruption lasted only a few minutes, said Coombs who called it “a big event that got people’s attention, but did not have widespread impact”.