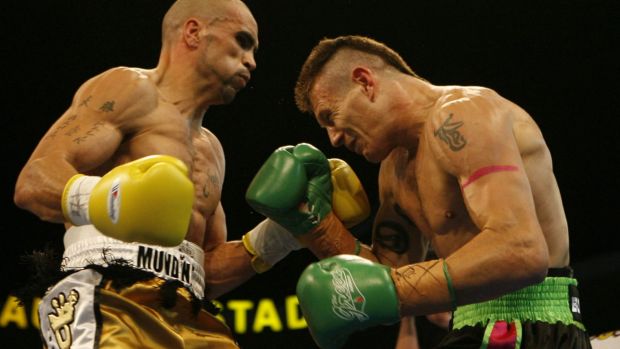 LONDON - Male boxers will step into the ring without headguards at the Rio Olympics for the first time since the 1980 Moscow Games, and their vests could be next on the hit list. With the lines between amateur and professional increasingly blurred, another distinctive difference between the codes -- the red or blue singlets worn by Olympic boxers -- is being questioned. "The removal of vests (from the ring) is a proposal we are looking at," a spokesman for governing body AIBA told Reuters in response to a query. "It has to be approved by the relevant AIBA commission and approved by the executive committee and then we will present this request to the IOC (International Olympic Committee)." Unlike professionals, who fight bare-chested, Olympic boxers have always worn tops -- possibly for reasons of decency in the early days although they also protected against rope burn and absorb sweat. There was once even talk of 'smart vests', with electrodes to sense a scoring blow, before AIBA discarded the computers and changed to a pro-style 10-point scoring system. AIBA president Wu Ching-kuo said in 2011 that "we will still need to keep the vest for amateur boxing because of the country name" but much has changed since then. The Olympic tournament is no longer the preserve of amateurs, with AIBA approving a constitutional change in June that allows professionals in for the first time. AIBA's team-based World Series of Boxing (WSB) and individual APB Boxing, whose competitors fight for money while remaining eligible for the Olympics, have no headguards or vests. HEADS UP The arguments for and against headguards, first used at the 1984 Los Angeles Games, may continue for some time but AIBA officials are convinced theirs is the right call. "Both our statistical research and the feedback from boxers and coaches, shows us that this is the best outcome for our sport," Wu said in March. Boxers fought headgear free at the 2013 and 2015 world championships as well as the 2014 Commonwealth Games. Female boxers, who made their Olympic debut only in 2012, will continue with headguards pending further research. Mike Loosemore of the English Institute of Sport (EIS), who carried out research for the IOC after AIBA requested headguards be removed for Rio, supported the move. "There's three pieces of research that I personally have done which led me to the conclusion that removing headguards was a good thing," he told Reuters. That included comparing the number of knockouts and stoppages due to head blows in world series boxing against amateur fights at the time, and also in the 2009 and 2011 world championships compared with 2013. "There was a marked reduction in knockouts and stoppages in 2013 when the headguards were removed," he said. "I think what's more likely is that people feel safer wearing a headguard and so are prepared to take a blow to give a blow because they feel its not going to do them any harm," he said. "It may also be that the headguards reduce your field of vision. The blows that actually cause the damage tend to be the hooks that come in from the side ... you just don't see them." Loosemore said the IOC commissioned research from him and Australian Andrew McIntosh, who used dummies to assess the impact of blows to the head, "because they wanted to know if it was the right thing to do for the Olympics". The evidence, he said, indicated there would be more cuts but fewer head injuries without headguards. "The IOC took it very seriously and decided that probably having fewer head injuries was worth the increase in cuts." That could make the Games bloodier, and increase the risk of fights stopped on cuts -- as happened to Australian welterweight Daniel Lewis in the Commonwealth Games quarter-finals. "Bring the headgear back 100 percent," Lewis said on Twitter after being ruled out by the cut over his eye. "I had two fights, two comfortable wins with one TKO and a stupid elbow ruins it all." AIBA launched a 'Heads Up' campaign in 2015, while also promoting the use of a cut preventative cream. Lewis, meanwhile, will be chasing a medal in Rio. -Reuters