ISLAMABAD (92 News) – President Dr Arif Alvi on Wednesday said that health, education and poverty alleviation are among the top priorities of Pakistan tehree-e-Insaf (PTI) government. Addressing a seminar titled “TB Free Pakistan”, the president said the government has issued Insaf Health Cards to provide healthcare facilities to the people who cannot afford health expenses. Dr Arif Alvi also said the treatment of TB was very expensive in past but now its medicines are available at reasonable rates. He said the first project Prime Minister Imran Khan started was health related which reflects the government's commitment towards this important sector. The president said the role of media and Islamic scholars is very important in raising awareness among masses. He said in his letter written to Islamic Ideology Council, he asked them to use their influence on people by encouraging them to look after their health and of their families.

Pakistan will be made country free from tuberculosis by 2030

On the occasion, Minister of National Health Services Aamir Mehmood Kiyani said Pakistan will be made a country free from tuberculosis by 2030. He said this disease affects 580,000 people in Pakistan and health authorities are able to identify 350,000 patients. The minister said TB treatment is available at more than 6500 places across the country. Aamir Mehmood Kiyani said the government is committed to improve the health sector and a number of steps have been taken in this regard. 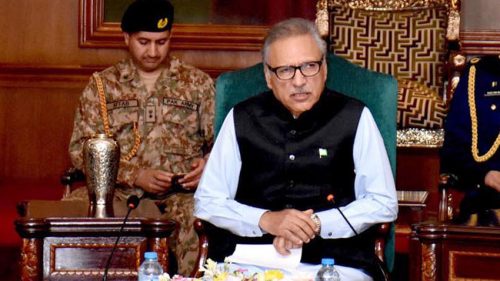 Earlier today, President Arif Alvi has said that promotion of education is amongst the priorities of present government. He was chairing a meeting of COMSATS University. The pstressed that higher education institutions will have to play their role for quality education in the country.

Desire for peace not to be considered a weakness, says President Alvi

Earlier, President Dr Arif Alvi has said that their wish for peace should not be considered a weakness.

Addressing the joint parade on Pakistan Day, he said that the armed forces had proved their capability and dominance by giving a befitting reply to Indian aggression. “We are a peaceful nation, but are not oblivious of our defence,” he said. The President said that Pakistan controlled terrorism by sacrificing lives and property. “Pakistan is a responsible nuclear state but it wants peace, not war. It also respects integrity and sovereignty of other states,” he said.