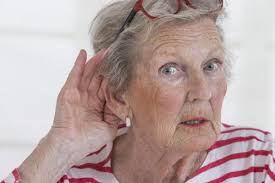 NEW YORK (Reuters) - Hard-of-hearing hospital patients who have trouble communicating with medical personnel are more likely to end up back in the hospital within 30 days, compared to patients who don’t have trouble hearing, a US study suggests. Researchers at New York University in New York City examined data from a nationally representative survey and found that discharged hospital patients who reported trouble communicating with their doctors had 32 percent greater odds of hospital readmission in the next month. “Attending to hearing loss is a strategy that hospitals really have not tried, and if they tried it they might be able to reduce the risk of readmission for significant portion of their patients,” researcher Jan Blustein of NYU’s Robert F. Wagner School of Public Service told Reuters Health by phone. Hospitals are often noisy, chaotic settings, where understanding speech is challenging, particularly for people with hearing loss, which is very common in older patients, Blustein and colleagues write in the Journal of the American Geriatrics Society. The 4,436 participants in the study were 65 and older and living in the community. All were hospitalized at least once between 2010 and 2013. Overall, about 12 percent said hearing difficulties made it hard for them to communicate with doctors or other medical staff. Most of the hard-of-hearing individuals were older and of lower socioeconomic status, noted Margaret Wallhagen of the University of California, San Francisco, who was not involved in the study. Wallhagen said this phenomenon has been shown in other studies as well and added that the healthcare providers worry about readmission because it is a cost factor for them, as they are penalized for it. Trouble communicating was also associated with more health problems and worse self-rated health, the authors said. The researchers note that relying on people to describe their own degree of hearing trouble and difficulty communicating is a strength of the study. But they also acknowledge that some participants might underreport their hearing difficulty because of stigma attached to it. Indeed, Blustein said, there is scant research on this topic as hearing loss is a hidden disability that is a stigmatized problem, and little attention is paid to it. “It is not a problem that has a lot of appeal not something we talk about,” she said. In the US, hearing loss affects about one in three people between the ages of 65 and 74 and nearly half of those older than 75, according to the National Institutes of Health. A recent study published in JAMA Otolaryngology-Head & Neck Surgery suggested that when hard-of-hearing older adults wear hearing aids, they are less likely to be hospitalized or to visit the emergency room. Blustein said raising awareness about the high prevalence of hearing loss among the old people and educating staff on how to talk to people with hearing difficulty could help tackle some of the problems. “Few hospitals even attend to hearing loss and this is potential goldmine for them,” she added.