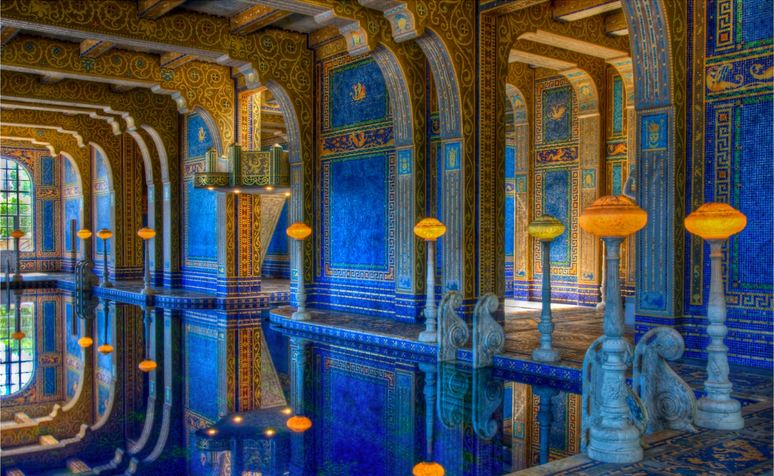 LOS ANGELES - California's Hearst Castle, the monumental estate built in the early 20th century for publishing tycoon William Randolph Hearst, hosted a screening on Friday of "Citizen Kane," the Orson Welles classic that infuriated the man who inspired it. Hearst, an old man by the time of the film's 1941 release, was livid over its portrait of a ruthless, wealthy publishing baron, Charles Foster Kane, a fictional character played by Welles and drawn closely to Hearst's likeness. He died in 1951. But his heirs have recently embraced the movie as a dramatized, if embellished, account of a self-made tycoon and politician whose newspaper empire reshaped US journalism and stirred public sentiment that helped ignite the Spanish-American War in 1898. "The family would prefer to have people know it's just a movie," said Wendy Eidson, director of the San Luis Obispo International Film Festival, which is organizing the screening as part of its six-day festival. Tickets for the exclusive 60-person event in San Simeon, California, sold for $1,000. The evening began with a tour of the castle grounds - inspiration of the fictional Xanadu estate in "Citizen Kane" - followed by viewing of the film in Hearst's own screening room, restored to its full early-20th century opulence. "There was not a person in the room who didn't appreciate the irony," Eidson said. "There was sort of a moment where you're just going 'Wow.'" The event was hosted by Ben Mankiewicz, grandson of Herman Mankiewicz, who co-wrote the screenplay with Welles, the film's star and director. The guest list included John Milius, writer of "Apocalypse Now" and other movies. Eidson said she pitched the idea as a joke a few years ago to Stephen Hearst, the publisher's great-grandson, who was surprisingly interested. Produced when Welles was just 25, "Citizen Kane" frequently tops all-time best movie lists and ranks No. 1 on the American Film Institute's roster of greatest American films. Still, it did not win best picture at the 14th Academy Awards in 1942. The award went instead to John Ford's "How Green Was My Valley," and "Citizen Kane" won for original screenplay. "The public can mistake fiction, whether in print or film, as history itself," said Jim Allen, director of marketing at Hearst Castle. Proceeds from the screening will be split between the nonprofit Friends of Hearst Castle and the San Luis Obispo International Film Festival. - Reuters