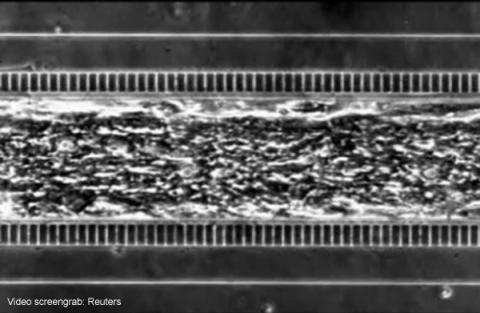 CALIFORNIA - Bioengineers in California have developed a system that allows human heart cells to function outside the body, a development that could potentially prove a powerful tool for drug development as well as pave the way toward personalizing treatments for patients with heart conditions. "It is the first demonstration of an actual human heart which is based in a system that is mimicking the physiology as close as possible," said Anurag Mathur, a principle scientist involved in the research. The device has been named a "heart-on-a-chip" and it is comprised of cell layers derived from IPS stem cells that form heart tissue which is housed on a small slab of silicon. To keep the cells beating, micro-fluidic channels thinner than a human hair nurture the cells and also provide a way to deliver drugs to them for testing. "These are mock blood vessels, they are similar to blood vessels. The fluid that we are interested in comes across this tissue and then it bathes it with the drug," said Kevin Healy, a professor of bioengineering and material science at the University of California Berkeley. "We give it caffeine, heart-on-a-chip beats and accelerates its heart rate. We give it adrenaline, it accelerates its heart rate," he added. The scientists can analyze the effect different drugs have on the cells. In early trials using well known heart medications, the heart chip proved an accurate tool, as it mimicked the reaction the drugs would have on a real heart. Currently, pharmaceutical companies spend billions of dollars testing new drugs on animal models that more often than not fail in predicting if new medications are toxic to humans. The heart chip could revolutionize drug screening by providing a tool that can be modified to model human diseases to test new drugs, said Healy. The research is still in its infancy, but Healy says its potential is enormous. He envisions a day where these devices give doctors the ability to use a patient's own cells to personalize a treatment plan. To achieve that goal, the scientists are also developing other chip-based models to mimic the function of the liver and fat with the hopes of networking the devices. Healy says that's important for drug screening because what might prove safe in the heart could prove toxic in the other organs. For now, Anurag Mathur is enjoying his success and remembers many sleepless nights achieving it. "There were days when I used to feel very sad as to why it was not working and I even had problems sleeping or even getting heart cells and devices in my dreams," he said. But those dreams ultimately came true, and a powerful new tool in medicine has been created. - Reuters