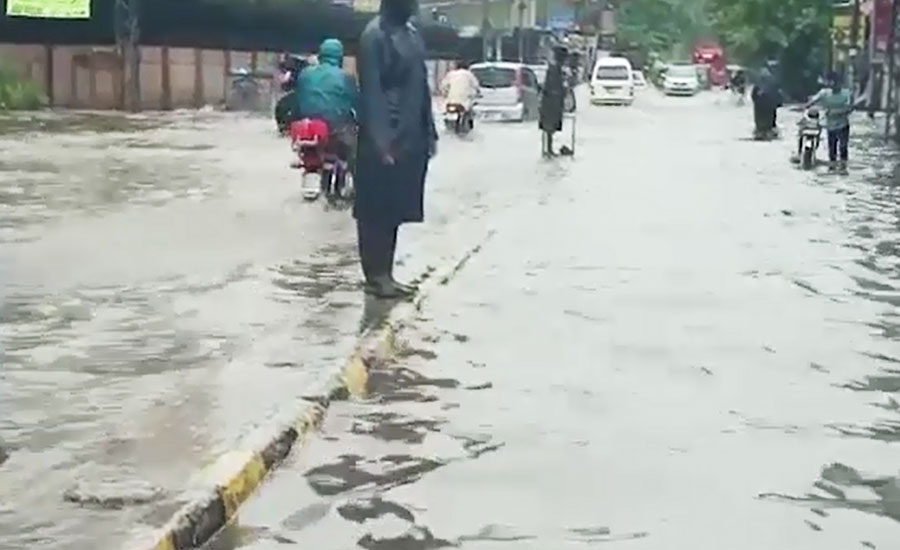 LAHORE (92 News) – Heat-stricken residents of Lahore received respite from the sweltering heat as the rain of monsoon season turned the weather pleasant here on Thursday. According to the details garnered, the heavy monsoon rain lashed Lahore and its adjoining areas in the wee hours. The incessant rain has flooded roads and streets in many parts of the city which stopped many vehicles mid-way. Following to the rain storms in Lahore, the roads seem to be ponds and the rainwater entered houses in several low-lying areas of Lahore while parts of the city witnessed power outage as more than 200 feeders tripped soon after the rain started. 110 millimeter in Misri Shah, 104 millimeter in Walled City of Lahore, 75 millimeter in airport and 75 millimeter Gulshan Ravi of rainfall is recorded. Many vehicles including motorbikes and cars stopped due to the rain. Dozens of flight also have been delayed due to cloudy weather. Meanwhile, the leaves for WASA staff have been cancelled due to the emergency situation. Locals faced much difficulty heading to offices as the rain converted roads to puddles. Heavy rain was also reported from other parts of Punjab including, Rawalpindi, Jehlum, Gujranwala, Hafizabad, Chunian, parts of Peshawar, Malakand, Hazara Zhob divisions and Gilgit Baltistan. The Met Office predicted that rain-thundershower associated with gusty winds is expected to continue at scattered places in parts of country next three days. https://www.youtube.com/watch?v=oEDjtiCL_7A Earlier on July 17, seven members of a family were killed after the rain-affected roof of a house collapsed in Kot Abdul Malik area of Sheikhupura. Rescue 1122 and police said they responded to an emergency call to find the roof a house caved in and people trapped inside the debris. With the help of locals, rescuers removed the debris and pulled the bodies of a couple and their five children. The structure of the property collapsed apparently owing to long-lasting downpour, rescuers established. The funeral prayer of the deceased will be offered after Zuhar prayer. In another incident, a minor girl was killed in another roof collapse tragedy in Ghakkhar village on Defence Road. Locals and rescuers, however, managed to recover the other girl safely from debris. One of the doors of Shahi Qilla (Lahore Fort) damaged because of rain is being repaired.