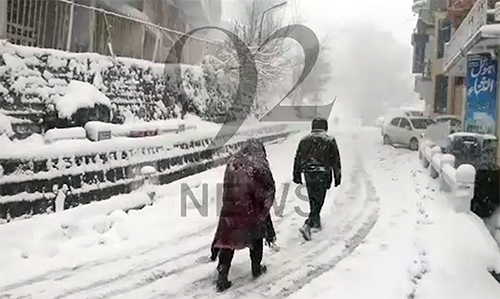 ISLAMABAD (92 News) – A wave of snow falling started which turned the weather cold and the mercury dropped from last night in different parts of the country including Murree, Islamabad, Mansehra, Abbottabad and Azad Kashmir.

In Islamabad, Margalla hills received heavy snowfall after three years which turned the weather of capital chilly. The mountains including picnic point Pir Suhawa wore a white snow cover and a cold wave has gripped the twin cities.

Several roads have been closed for every kind of traffic due to thick snow, while around 1 to 2 feet snowfall has been recorded in different cities.

In Quetta, heavy snow covered parts of the city and suburban areas, while the temperature dipped turning weather cold again. According to Met Office, the temperature was recorded at -4 while, mainly cold and dry weather is expected in Quetta.

Meanwhile, Mansehra division and its adjoining areas are also facing cold weather due to snow however, Tanawal has witnessed snowfall after 11 years, blocking connecting roads to Kaghan and Shinkiari.

On the other hand, many cities in Punjab including twin cities received rainfall. According to Met Office, rain occurred in Islamabad, Rawalpindi, Khyber Pakhtunkhwa, Gilgit-Baltistan and Kashmir.