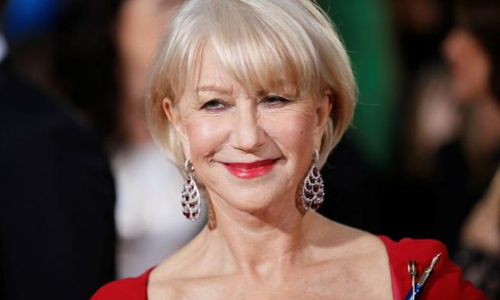 NEW YORK - Before Helen Mirren agreed to play elderly Jewish World War Two refugee Maria Altmann in the new film "Woman in Gold," the Academy Award-winning actress checked the last page of the screenplay to see if the character was there. It's a trick Mirren learned early in her career. Altmann's character was at the end of the screenplay of the film about her life that opens in U.S. theaters on Wednesday. "All the good roles are on the last page and if they are not on the last page, they have to have a good exit. I've always done that," Mirren, 69, said in an interview. "If it just sort of disappears, it is a hopeless role. It is not worth doing. It is not worth reading the script." The film tells the story of Altmann's against-the-odds battle with the Austrian government to regain paintings by artist Gustav Klimt that the Nazis stole from her family during World War Two. The most famous of the works, "Portrait of Adele Bloch-Bauer I," was a 1907 oil and gold painting of Altmann's aunt. "She was amazing. I wish I could have met her," Mirren said about the feisty Altmann, who died in 2011 at the age of 94. "It is a lovely story of triumph by an older woman. There are not many of those stories around." KEEPING ALIVE THE MEMORY Altmann was in her 80s and living in California when she enlisted the help of a young lawyer and family friend, E. Randol Schoenberg, played by actor Ryan Reynolds, to get back the painting from the Austrian government that ended up with the work. Mirren, now starring on Broadway as Queen Elizabeth II in "The Audience," said the most challenging thing about playing Altmann was capturing her essence and the deepness of what she had experienced. "I had to live in her mind and in her memory and that is what I tried to do," she explained. Using flashbacks "Woman is Gold" shifts back in time to Altmann's childhood when the painting hung in her home. Canadian actress Tatiana Maslany plays the young Altmann, who flees with her husband to escape the Nazis. Altmann and Schoenberg submitted their case to binding arbitration in Austria, where a panel of judges decided in 2006 that the works should be restored to their rightful heirs. Cosmetics heir Ronald S. Lauder bought the portrait from Altmann the same year for his Neue Galerie in New York for $135 million, a record price for a painting at the time. Mirren hopes "Woman in Gold" will remind audiences of the hardship and suffering people endured during the war. "Hopefully it will bring the memory of it and carry it on a little further and show people you can fight against the odds and sometimes, occasionally, brilliantly, miraculously win," she said. - REUTERS