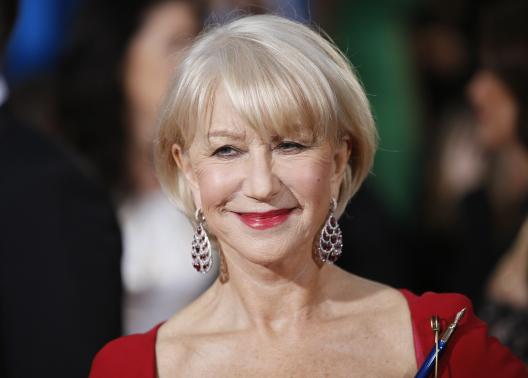 NEW YORK - Nearly a decade after winning an Academy Award for her role as Britain's Elizabeth II in "The Queen," Helen Mirren is ruling over Broadway in "The Audience," a new play about the monarch's weekly meetings with her prime ministers. Mirren said she has huge empathy for the 88 year-old royal she plays in the British import that premiered in London and opened on Sunday at New York's Gerald Schoenfeld Theatre. "Both times, for the film and now the play, I had to do a lot of research and the more research I did really, the more respect I gained for her," Mirren, 69, said ahead of the opening. The queen's weekly meetings with her prime ministers are private, so "The Audience" is an imagining of the conversations and relationships Elizabeth has had with eight of the 12 British leaders who served during her more than 60-year reign. Mirren, a multiple-Tony nominee, admits it is difficult to imagine what Elizabeth's world is like. But the newspaper USA Today said her Elizabeth defends the monarchy and "deftly reconciles her sense of entitlement with a deep humility and empathy." In the play, which does not run chronologically, Mirren is shown as a older queen reassuring a doubtful John Major, played by actor Dylan Baker, that is he is up to the job. In the next scene she changes into the young Elizabeth, holding her first meeting as queen with the formidable Winston Churchill (Dakin Matthews). The play, written by Peter Morgan who also penned "The Queen," and directed by Stephen Daldry, lets audiences listen in to her conversation with a depressed Gordon Brown (Rod McLachlan.) They hear her playful, friendly banter with Labor Prime Minister Harold Wilson and watch as she soothes a testy Margaret Thatcher. With each scene the queen's age changes along with her costumes and hairstyle. "Even if she's not the real royal deal, this is still about as close as most of us are going to get to a cozy tete-a-tete with the best loved of the regal Windsors," said The New York Times newspaper. Mirren also appears alongside younger versions of the monarch, showing her reluctant to move into Buckingham Palace and her early annoyances with royal life. "It's obvious who the real ruler is when it comes to Broadway. Mirren's crown is safe," said The New York Post newspaper. - Reuters