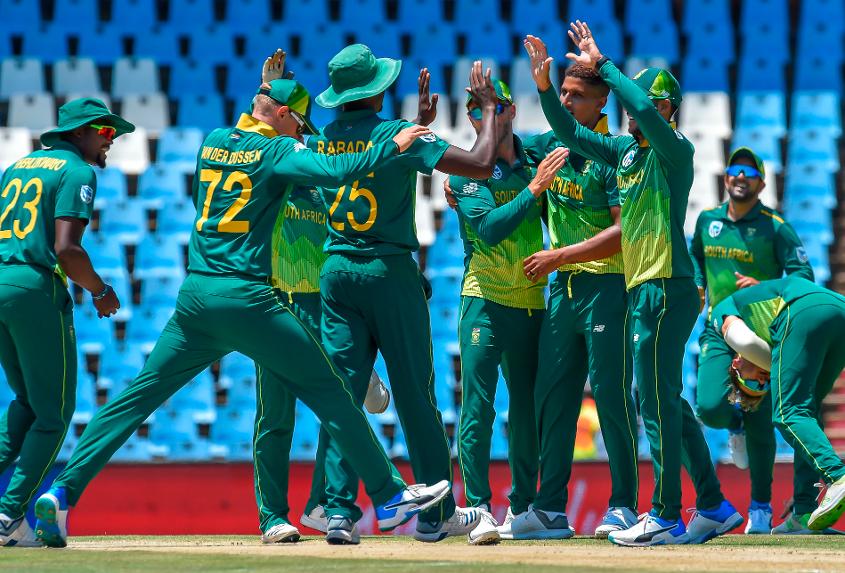 CENTURION (Web Desk) – A sparkling 80 not out from Reeza Hendricks trumped Imam-ul-Haq's fifth ODI hundred as South Africa triumphed over Pakistan in the third ODI by the DLS method.

Pakistan won the toss and elected to bat, and found themselves under pressure quickly as Fakhar Zaman fell for two in the fourth over. Having been shackled early on, he aimed a swipe at Beuran Hendricks, and only succeeded in top-edging to Kagiso Rabada, giving the debutant his maiden ODI wicket. Babar Azam and Imam-ul-Haq continued their individual superb form to repair the damage, and both were able to push on beyond recent ceilings. Babar made two half-centuries in the Test series, and, after two scores of 49 since, pushed on past fifty once more before being pinned LBW by Dale Steyn, while after being dismissed for 86 in the first ODI, Imam was not to be denied a century this time. He fell two balls after reaching the milestone, coming down the track to Tabraiz Shamsi in an attempt to up the rate, and only succeeding in holing out to Rassie van der Dussen. During the course of the innings he became the second-fastest, in terms of innings, to 1,000 ODI runs, doing so in one more knock than his opening partner Zaman. His knock was a lesson in controlled middle-overs ODI batting. Though he only struck eight boundaries, he maintained a good strike-rate simply by picking gaps in the field, and laid the platform for the middle order to build on. It still took some finishing, and Mohammad Hafeez, Shoaib Malik, and Imad Wasim’s knocks were all vital in lifting Pakistan past 300. Hafeez’s half-century was a continuation of the good form he displayed in striking a match-winning fifty in the first game of the series, and valuably lifted the scoring rate before the death overs, meaning the rest weren’t left with too much catching up to do. Shoaib’s 27-ball 231 maintained the momentum, while Imad’s unbeaten 23-ball 43 supplied the final surge, with the all-rounder finding the rope on seven occasions. Steyn was the pick of the bowlers, claiming 2/43 despite bowling in the slog overs, but his departure from the field with an apparent knee injury, straight after dismissing Hassan Ali with his final ball of the day, will be a cause for concern for the South African team management. A greater immediate concern was chasing down the target set by their opponents, and for a time, as Quinton de Kock and Hashim Amla got in and got out, it looked like the game was set for a classic. The latter chipped Hassan Ali to Babar Azam at midwicket, while the former was brilliantly run out Shadab Khan, who had just one stump to aim at. Rain threatened to spoil the contest completely, first interrupting three overs before a result would be possible, but the weather relented for long enough to allow Reeza Hendricks to supply a sparkling knock which drove South Africa ahead of the DLS par score when the rain fell again. He struck the ball powerfully and timed it beautifully, and along with Faf du Plessis added a century stand for the third wicket. Had the rain not come, he would surely have made a hundred. As it was, a 2-1 lead in the series had to serve as reward enough.