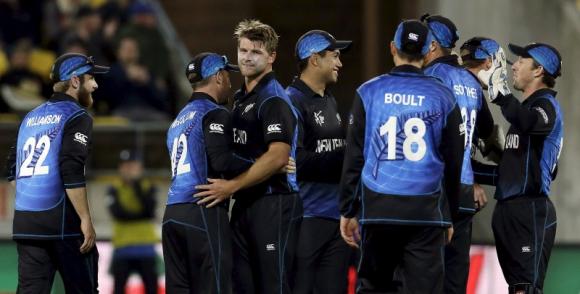 AUCKLAND - A rain-interrupted South African innings resulted in a target of 298 of 43 overs for New Zealand in the first semi final of Cricket World Cup on Tuesday. Batting first, South Africa put up a total of 281 at the loss of 5 wickets which was increased to 297 according to the Duckworth Lewis method. Earlier, Pace bowler Matt Henry has jumped from first-class cricket to a World Cup semi-final, named in New Zealand's team to play South Africa at Eden Park on T uesday. Henry, who was a late replacement for fast bowler Adam Milne on Monday, will get early use of the ball after South Africa captain AB de Villiers won the toss and elected to bat. Henry's inclusion has already been likened to that of former All Blacks flyhalf Stephen Donald, who kicked the winning penalty in the 2011 rugby World Cup after being summoned from a fishing trip when an injury crisis struck the New Zealand team. "We've drafted Matt Henry into the squad and he comes straight in, in place of Adam Milne. He's a wicket-taking option and we wanted him in as that third seamer," McCullum said in a pitchside interview. "It was a really tough choice but we thought go with Matt's extra pace and the aggressive option." South Africa named their first choice side with Vernon Philander coming back from a hamstring injury and replacing Kyle Abbott. New Zealand's largest city was drenched by rain that fell overnight and into the early part of the morning but it cleared by around 11 a.m. local time (2200 GMT) and the Eden Park ground staff had removed the covers from the wicket area. While not quite the frenzy that accompanied the All Blacks' rugby World Cup campaign four years ago, the match has dominated media coverage in the last 48 hours, while business and schools were closing early so people could watch the game on television. Teams: New Zealand - Martin Guptill, Brendon McCullum (captain), Kane Williamson, Ross Taylor, Grant Elliott, Corey Anderson, Luke Ronchi, Daniel Vettori, Tim Southee, Matt Henry, Trent Boult South Africa - Hashim Amla, Quinton de Kock, Faf du Plessis, AB de Villiers (captain), Rilee Rossouw, David Miller, JP Duminy, Dale Steyn, Vernon Philander, Morne Morkel, Imran Tahir – Reuters