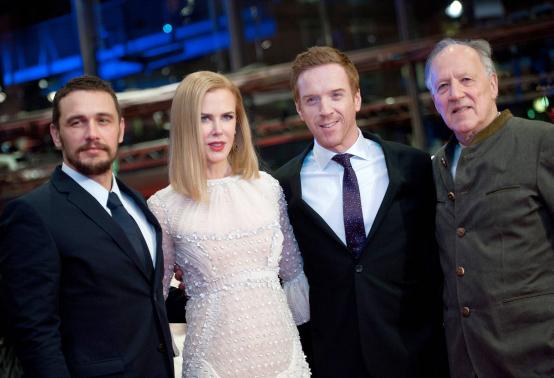 (Reuters) - Nicole Kidman says she loves the desert, which was lucky for her as veteran German director Werner Herzog expected her to spend a lot of time there for his entry for this year's Berlin film festival competition. His "Queen of the Desert", which had its premiere on Friday is based on the life of the British society woman Gertrude Bell. Known as "the female Lawrence of Arabia", she trekked the deserts of the Arabian peninsula in the early part of the 20th century, knew T.E. Lawrence, befriended Bedouins, had two failed love affairs, worked as a spy and wound up as Britain's diplomatic expert on the Arab tribes. Herzog, 72, who directed off-the-wall features such as "Fitzcarraldo" and other films starring the maniacal Klaus Kinski in the 1980s, said he wished he'd made more movies with women. "I think I should have done films about female protagonists much earlier in my life. I always thought I was a director for men ... and I'm glad that finally this discovery came to me, I should have done films about female characters from much, much earlier on," Herzog told a news conference. Kidman said she was attracted to the movie in part for the opportunity to bring Bell's life to the screen, but also for the chance to film in the desert. James Franco, Robert Pattinson and Damian Lewis co-star, but as Herzog pointed out, the Australian actress appears in all but one scene. "I think what's so beautiful about this movie is you just see how exquisite that region is and the desert and the people and being a part of it certainly gives you a strong affinity for that, but I've always felt a pull toward the desert," she said. Herzog said he hoped the film would give viewers a better appreciation of the region and its politics, in part complicated by borders Bell helped to draw. He said if the West did not understand the region, it risked falling further into the hands of Islamic State. "We legitimately have to ask ourselves the question whether the border delineations ... have been the best of all worlds, no they have not. But we see the alternative out there, the alternative is materializing and the alternative is no borders -- and Islamic State running this as a Caliphate which includes Lebanon and Israel, among others," he said. The film got mixed early reviews, with Britain's Independent newspaper saying: "This is the closest Herzog has come to making a conventional Hollywood movie -- what it lacks is the perversity, drive and wildness that are usually his hallmark."