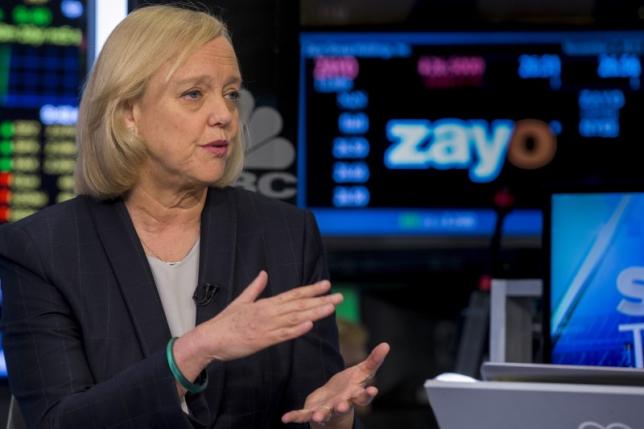 WASHINGTON - Calling Donald Trump an "authoritarian character" and a threat to democracy, Meg Whitman, a prominent Republican fundraiser and chief executive of Hewlett Packard Enterprise, endorsed Democrat Hillary Clinton's White House bid. "To vote Republican out of party loyalty alone would be to endorse a candidacy that I believe has exploited anger, grievance, xenophobia and racial division. Donald Trump’s demagoguery has undermined the fabric of our national character," Whitman posted on Facebook about the Republican nominee. In an interview with the New York Times, which first reported the endorsement, Whitman said it was time "to put country first before party" and that she would give a "substantial" contribution to Clinton's campaign. Whitman told the Times that Trump is a "dishonest demagogue" and said that those who look at other failed democracies and believe "it can't happen here" are mistaken. "Trump's unsteady hand would endanger our prosperity and national security. His authoritarian character could threaten much more," Whitman wrote on Facebook. Whitman's endorsement is the latest from a string of business leaders who have moved to back Clinton in recent days, including other high-profile Republicans. Clinton reached out to Whitman personally about a month ago, according to the Times report. Her campaign also courted former New York City Mayor Michael Bloomberg, who delivered an endorsement speech at the Democratic National Convention in Philadelphia last week. Clinton's campaign viewed Bloomberg, a billionaire Republican and household name, as being able to go toe-to-toe with Trump's claims he is best suited to run the country given his own business credentials, according to those familiar with the discussions. Dallas Mavericks owner and television personality Mark Cuban also backed Clinton last week, calling her campaign chairman John Podesta on the night she accepted her nomination to say he was ready to support the former secretary of state. Cuban on Saturday made a surprise appearance at a Clinton rally in Columbus, Ohio, reversing course from earlier statements that he would likely vote for Trump. "Leadership is creating consensus in our amazing country and letting everybody know that American exceptionalism and the American dream are alive and well, that’s what leadership is, that’s what Hillary Clinton is," said Cuban. Clinton's campaign released a list in June with business leaders from whom they had secured support. Among them were several high-profile Republicans, including Dan Akerson, a former chairman and chief executive at General Motors. -Reuters