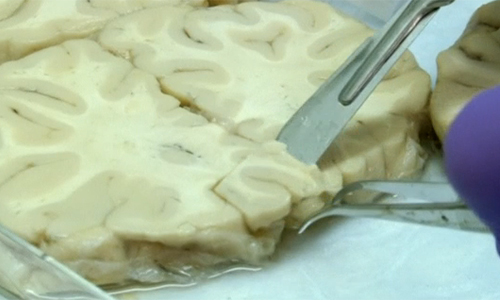 NEW YORK – A research team at Johns Hopkins University says they have found a unique honeycomb pattern of broken and swollen nerve fibers in brains of Iraq and Afghanistan combat veterans who survived improvised explosive device (IED) blasts, but later died of other causes. In doing so, the team says they may have found the signature of "shell shock" - a problem that has afflicted many soldiers since World War One warfare. The team of eight researchers, led by Vassilis Koliatsos, professor of pathology, neurology and psychiatry and behavioral sciences at the Johns Hopkins University School of Medicine, studied the brains of five U.S. combat veterans and compared them to 24 other brains of people who died from causes such as car accidents, drug overdoses and heart attacks. Koliatsos says the honeycomb pattern is unique to the combat veterans' brains, and was found in the frontal lobe which controls decision-making, reasoning and other executive functions. "We typically think of traumatic brain injury as something that happens when an external force comes against your skull," says Koliatsos. But he says they may have found a new type of injury unique to combat veterans exposed to an IED blast. "In this particular case, the force is coming against your chest so the blood gets squeezed. And as the blood gets squeezed, there's a lot of back apple blood into the brain. And because there's a pulse of over-pressure wave that happens (like this), the brain also swells (like this). And when the brain swells, it pushes against some of the fixed elements inside the skull," says Koliatsos, explaining the distinctive honeycomb pattern found in critical brain regions. Koliatsos says this hidden brain injury may later play a role in a veteran's psychological and social problems. "And because of the way vasculature is organized in the brain, most of this damage happens in the front of the brain - what we call the frontal lobes. And that's very important because this is the site, the center, of the executive functions of the brain. Functions that allow you to put your life together, organize, plan ahead, understand abstract. And you can imagine this can make your life difficult," says Koliatsos. U.S. veteran Aragorn Thor Wold says studies like these are necessary to better understand what happens in the field. Wold was a Navy Corpsman who served with the marines in combat medicine for nine years and was deployed twice to Iraq. He says his first deployment, with the 3rd Battalion 25th marines, suffered the most casualties than any other battalion in the war - 48 were killed in action and over 350 wounded. Now a veterans advocate, Wold says many of them are still dealing with the problems associated with PTSD. "How can we differentiate TBI from PTSD. Is it an organic brain injury. Is it an anxiety disorder, illness side, you know. There's a lot of those questions floating around. So I won't say the holy grail but a huge deal would be a biomarker." And while there are many efforts in the industry to find a biomarker, it is not presently available. Koliatsos says it is difficult to gather many more combat veterans' brains that have been exposed to an IED blast. So they are working with engineers to do simulation research to mimic the brain's tissue elements, to try to confirm the hypothesis that brain injury can come from within the chest. Going forward, Koliatsos says he hopes his research may contribute to a different way of treating brain injuries, with medications that stimulate frontal lobe function. "If there is an executive disfunction, and disfunction of the front of the brain, you may think of different medications," says Koliatsos. He says he would also like to see improved body gear in the military that would give greater protection to the chest, and minimize the impact of explosive blasts upon the brain. –Reuters