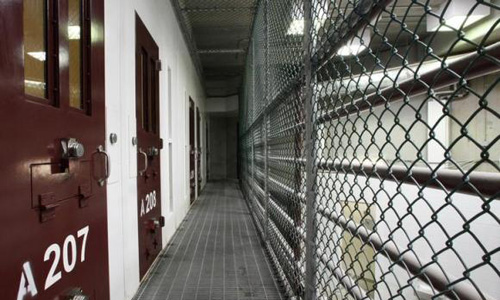 FORT MEADE, Md. (Reuters) - The years-long pace of bringing al Qaeda suspects at Guantanamo Bay to trial emerged as a key issue in a hearing on Monday for the accused mastermind of the USS Cole bombing as his lawyers warned that speeding up tribunal proceedings risked sacrificing justice. Defense attorneys accused US military prosecutors of exercising “unlawful influence” in trying to bring the cases to a conclusion more rapidly. The presiding judge responded by ordering the military commander overseeing the tribunals to give testimony about his intentions as they relate to a recent prosecution memo citing high costs associated with the slow pace of proceedings. “Unlawful influence in any form is incredibly destructive to our process,” said the judge, Air Force Colonel Vance Spath. He also ordered the release of 40 of the 47 documents sought by defense lawyers regarding military commanders’ complaints about the cost and pace of proceedings. He gave no reason for withholding the other seven documents. The unlawful influence allegations arose during a pretrial hearing for Abd al-Rahim al-Nashiri, a Saudi national charged with orchestrating the suicide bombing of the USS Cole in Yemen in 2000. The blast killed 17 American sailors. Al-Nashiri was captured in 2002 and secretly held in CIA custody until his transfer to the US naval base at Guantanamo Bay, Cuba, in 2006. He faces the death penalty or life imprisonment if convicted. Deputy Defense Secretary Robert Work ordered military judges last month to take up residence near the naval base, to shorten the distance needed to travel for hearings there. Defense attorney Navy Commander Brian Mizer said the relocation order and concerns about costs showed the military was seeking to “accelerate this litigation.” “This is the mortal enemy of military justice,” Mizer said. In his memo, retired Marine Corps General Vaughn Ary said the tribunals he oversees met for just 34 days in 2014, at a cost of $78 million. At that pace, the expense of proceedings was running $7,647 a minute, or $2.2 million a day, he wrote. “I believe the status quo does not support the pace of litigation necessary to bring these cases to a just conclusion,” according to the memo, obtained by the Miami Herald. Prosecuting attorneys have opposed compelling the testimony of military commanders as witnesses. Nevertheless, Ary was scheduled to testify as soon as Tuesday. The hearing was monitored by Reuters via closed-circuit television at Fort Meade, Maryland.