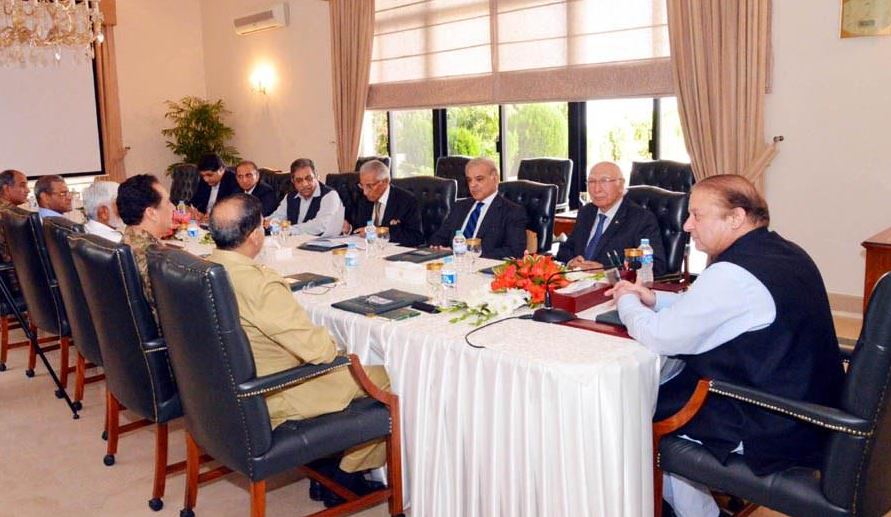 ISLAMABAD (92 News) - Prime Minister Muhammad Nawaz Sharif chaired a high-level meeting on Yemen situation on Thursday. The high-level meeting expressed the hope that the Yemen crisis will be solved peacefully. The meeting expressed satisfaction on the efforts being made by government and vowed that a constructive role will be played for a peaceful resolution of the crisis in Yemen. Chief Minister Punjab Muhammad Shahbaz Sharif, who visited Saudi Arabia as Special Envoy of the Prime Minister along with a delegation briefed the meeting about the outcome of their discussions with the leadership of the Kingdom. The objective of the visit was to express solidarity with the leadership and people of Saudi Arabia. During this visit the delegation met with His Royal Highness, Prince Muhammad bin Nayef, Deputy Crown Prince and Minister for Interior and His Royal Highness Prince Saud Al-Faisal, Foreign Minister of Saudi Arabia. The meeting was apprised that Shahbaz Sharif reiterated to the Saudi leaders unequivocal support of the government and people of Pakistan to the sovereignty and territorial integrity of Saudi Arabia while reaffirming that the people of Pakistan stand ever-ready to protect Harmain Al-Sharifain and the people of Saudi Arabia. He said Pakistan has always stood by Saudi Arabia, and Saudi Arabia with Pakistan. The meeting was informed that Saudi leaders reciprocated the warmth of relations between Pakistan and Saudi Arabia and reaffirmed the special bond of friendship between the two countries. The Saudi leadership also appreciated the statement of the Prime Minister of Pakistan amplifying the unanimously resolution of the parliament. The delegation held detailed discussions with the Saudi leadership on the situation in Yemen and condemned the violent overthrow of the legitimate government of President Hadi by the Houthis. The civil and military leadership was further informed that the delegation welcomed the adoption of United Nations Security Council (UNSC) resolution of calling upon the Houthis to end use of violence that undermines political transition in Yemen, and calls upon them to withdraw their forces from all areas they have seized, including the capital Sana’a, and relinquish all arms seized from military and security institutions. The delegation also expressed its concerns on the reports of foreign support to the Houthis, and noted with satisfaction that the UN resolution requires all member states to prevent supply of arms and equipment to Houthis and their allies. During their briefing the delegation members said they affirmed to the Saudi leadership that the government of Pakistan would fully participate and contribute to the implementation of the UN resolution, and discuss the possibility of expanding Pakistan's cooperation with Saudi Arabia in compatibility with the Security Council's resolution. Prime Minister’s Advisor on Foreign Affairs and National Security Sartaj Aziz, Prime Minister’s Special Assistant on Foreign Affairs Tariq Fatemi, Foreign Secretary Aizaz Chaudhry and services chiefs attended the meeting.