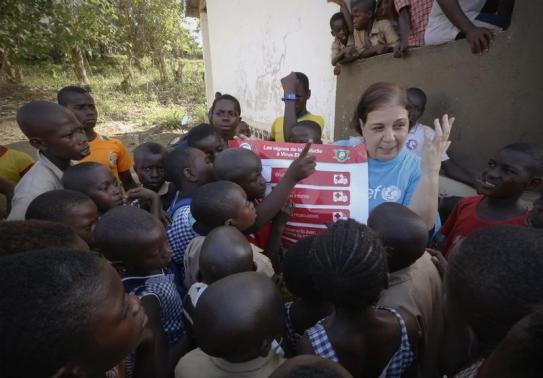 (Reuters) - Authorities fighting Ebola must do more to tackle a high death rate among young children whose isolation from parents also causes great distress and deprives them of the extra care they need, the World Health Organization (WHO) said on Friday. Reporting on a meeting of clinicians from Guinea, Liberia and Sierra Leone, it said there was a consensus that the strict "no touch" policy for Ebola patients could be lifted if good measures are in place to protect health workers from infection. "There is a need to address issues around children and pregnant women. Children under five had a very high rate of mortality, this was often because need a great deal of support to be fed, to be cared for," WHO technical adviser Dr. Margaret Harris told a news briefing. Mortality in children under five years of age has been 80 percent, meaning four out of five die, and up to 95 percent among under one-year-olds who require intensive nursing and frequent feeding, she said. "There was quite some suggestion that simply being separated and isolated as happens in an Ebola treatment unit had a devastating psychological effect on children, they did not have parents, they did not have carers," Harris said. "The complexities of dealing with children, especially children under-one, were not really being met and they need to be met." At least 21 pregnant women survived the hemorrhagic disease, but their babies or fetuses rarely did, she said. Nearly 9,000 people have died out of 22,495 known cases in the epidemic that began in December 2013. Survivors have displayed symptoms including severe muscle pain, headaches, mood swings, depression, loss of concentration and impaired vision, according to the WHO. Reuters reported this week that some of the 5,000 to 10,000 survivors complain of side effects months after their recovery. The U.N. Children's Fund said 16,600 children in the three countries have lost one or both parents. But communities and extended family members have taken in all but about 500 of them, overcoming initial fears and stigma. "Having said that, what really struck me when I was visiting the families in Liberia, however strong that family and relative support is, the grief is very raw," Andrew Brooks, UNICEF regional child protection adviser, said by telephone from Dakar. "The children, it doesn't take much for them to get very, very upset. I don't think we should under-estimate that side of things in addition to the economic and material support."