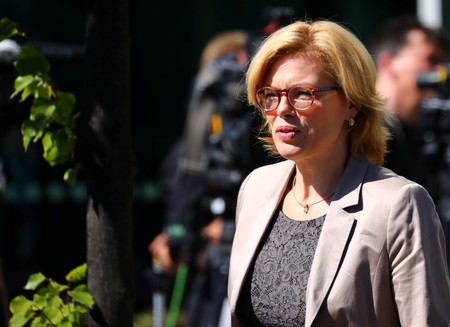 BERLIN (Reuters) - An agreement by the European Union to increase soy imports from the United States will not harm EU farmers, German Agriculture Minister Julia Kloeckner said in an interview published on Saturday. European Commission President Jean-Claude Juncker agreed to increase soy imports in a deal reached with US President Donald Trump, under which Washington will suspend the imposition of new tariffs on the EU. Kloeckner told the Passauer Neue Presse newspaper she saw “no disadvantages for European farmers of any kind” as a result of the decision because Germany and the EU were dependent on soy imports to meet demand for animal feed. Europe had previously relied on soy imports from South America, but would now shift its demand to US suppliers, she told the paper. Wednesday’s surprise deal suspends the imposition of a proposed US 25 percent levy on auto imports, with Washington and Brussels to hold talks over tariffs on imports of European steel and aluminum. The agreement sent shares higher as fears of a transatlantic trade war ebbed.