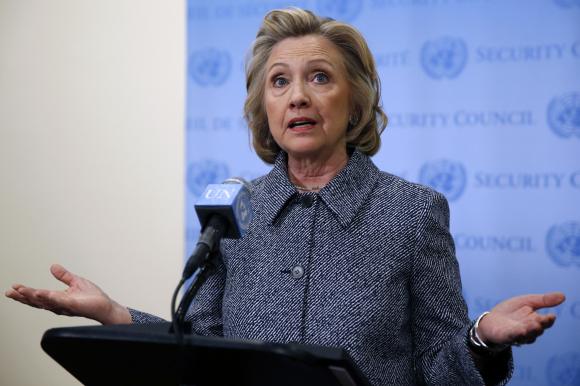 WASHINGTON (Reuters) - Former Secretary of State Hillary Clinton on Tuesday excoriated Republican senators for their letter warning Iran against a nuclear deal with President Barack Obama, saying they either were trying to help Tehran or harm the US commander-in-chief. Monday's open letter to Iran's leaders, signed by 47 Republican senators, sparked a political firestorm. Vice President Joe Biden also sharply criticized the lawmakers while three potential 2016 Republican presidential candidates, Louisiana Governor Bobby Jindal, former Texas Governor Rick Perry and former Pennsylvania Senator Rick Santorum, threw their support behind the letter. Clinton, a likely Democratic presidential candidate, said the Obama administration is in the midst of intense negotiations for a diplomatic solution to close off Iran's pathway to a nuclear bomb and provide unprecedented access to its nuclear program. "And one has to ask, what was the purpose of this letter?" Clinton said in an appearance at the United Nations. "There appear to be two logical answers. Either these senators were trying to be helpful to the Iranians or harmful to the commander-in-chief in the midst of high-stakes international diplomacy. Either answer does discredit to the letters' signatories," Clinton added. Biden said in a statement on Monday night the letter was "expressly designed to undercut a sitting president in the midst of sensitive international negotiations" and was "beneath the dignity" of the Senate. "This letter, in the guise of a constitutional lesson, ignores two centuries of precedent and threatens to undermine the ability of any future American president, whether Democrat or Republican, to negotiate with other nations on behalf of the United States," Biden wrote. Biden said he could not recall another instance in which senators wrote such a letter to advise another country, much less a longtime adversary. In the letter, the Republicans told Iran's leaders any nuclear deal with Obama could last only while he remains in office. Senator Tom Cotton, who spearheaded the letter, on Tuesday defended it and questioned Biden's foreign policy wisdom. "The only thing unprecedented is an American president negotiating a nuclear weapons deal with the world's leading state sponsor of terrorism without seeking congressional approval at the end of that deal," Cotton told CNN. Jindal said on Twitter that anyone thinking of running for president from either party should sign the letter to make clear Iran is negotiating with a "lame duck" president. Jindal said Biden owes an apology to Cotton, a first-term senator from Arkansas who served in the Army in Iraq and Afghanistan. "He wore the boots in Iraq. He's earned our attention, not your insults," Jindal said. Many Republicans contend Obama is so eager for a nuclear deal that he would sign off on an agreement leaving Iran able to easily make a nuclear weapon. World powers and Iran are trying to reach a framework agreement this month and a final deal by June to curb Iran's nuclear program in exchange for easing sanctions. Iran says the program is for peaceful purposes only.