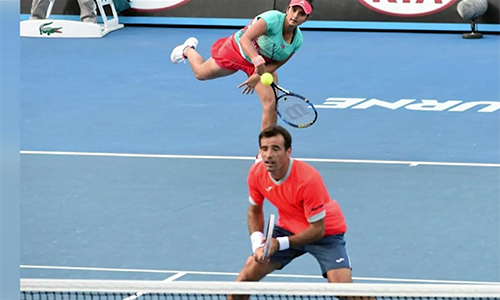 MELBOURNE –Tennis star Sania Mirza and her Croatian partner defeated Aisamul Haq and his partner in the mixed doubles at Australian Open on Tuesday, 92 News reported.

Swiss Hingis, 35, the former singles number one whose career has blossomed again as a doubles specialist, is also in the quarter-finals of the mixed doubles with another Indian partner, Leander Paes, and will face top seeds Mirza and Ivan Dodig.

Top seeds Hingis and Mirza, who teamed up last March and won the Wimbledon and the U.S. Open titles, came through 6-2 4-6 6-1 against Groenefeld and Vandeweghe.

They will face German Julia Goerges and her Czech partner Karolina Pliskova for a place in the final.

On Monday, Andy Murray and Johanna Konta both reached the quarter-finals of the singles -- the first time in nearly 40 years Britain has had a representative in the last eight of the men's and women's singles at a grand slam.

Murray and Soares, who won the Sydney title in only their second tournament together, face French duo Adrian Mannarino and Lucas Pouille in the semis after they surprised top seeds Jean-Julien Rojer and Horia Tecau in three sets.

In the other half of the draw Daniel Nestor and Radek Stepanek beat Treat Huey and Max Mirnyi, while Pablo Cuevas and Marcel Granollers beat Vasek Pospisil and Jack Sock.