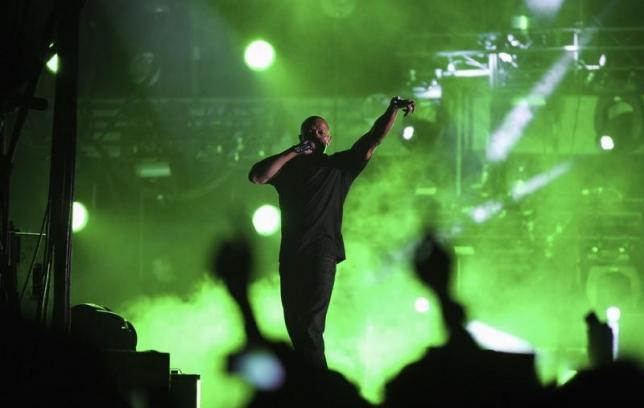 LONDON - US hip-hop mogul Dr Dre topped the British album chart on Friday with "Compton", his first record in 16 years, while "Marvin Gaye," US singer Charlie Puth's collaboration with Meghan Trainor, climbed 89 places to become the highest-selling single. Compton, which the 50 year-old rapper has dedicated to his Californian birthplace of the same name, outperformed its nearest competitors by over 28,000 combined chart sales, the Official Charts Company said. Puth's second British Number 1 finished the week with sales of over 94,000 after entering the tally the week before, and it marked another success for Trainor whose debut single spent four weeks at Number 1 last October. Calvin Harris and Disciples' "How Deep Is Your Love" stayed firm at number two on the singles charts, having been streamed over 2.21 million times in the last seven days, and the Weeknd's "Can't Feel My Face" jumped five places to number three. Former chart-toppers Little Mix’s "Black Magic" and Lost Frequencies' "Are You With Me" rounded out the top five. Dr Dre's return comes after a successful stretch in the producer's seat during which he fostered hip-hop artists such as Eminem, 50 Cent and Timbaland. He also became a successful entrepreneur and sold his headphone company Beats to Apple for 3 billion dollars in 2014. Elsewhere in the album charts, British folk singer Frank Turner's "Positive Songs For Negative People" was at number two and British singer-songwriter Ed Sheeran's "x" at number three. -Reuters