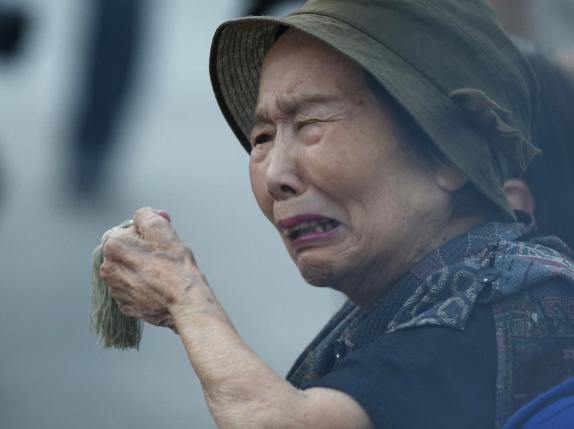 HIROSHIMA - Bells tolled and thousands bowed their heads in prayer in Hiroshima on Thursday at ceremonies that marked the 70th anniversary of the world's first atomic bombing and highlighted rising tensions over Japan's moves away from its pacifist constitution. Hiroshima Mayor Kazumi Matsui urged that nuclear weapons be abolished and demanded the creation of security systems that do not rely on military might. "Working with patience and perseverance to achieve these systems will be vital, and will require that we promote throughout the world the path to true peace revealed by the pacifism of the Japanese constitution," he said in a speech. Prime Minister Shinzo Abe and his government are pushing security bills through parliament that could send Japanese troops into conflict for the first time since World War Two, sparking protests around the country. At 8:15 a.m. (2315 GMT), the exact time the bomb exploded on Aug. 6, 1945, the crowd stood for a moment of silence in the heavy summer heat as cicadas shrilled and the Peace Bell rang. Many of those gathered for the ceremony renewed their calls for peace. "My grandfather died here at that time and I keep wondering what he felt then," said Tomiyo Sota. "He was still 21 years old and it pains me to think he died so young." The Hiroshima bombing, which killed 140,000 by the end of the year, was followed by the atomic bombing of Nagasaki on Aug. 9, 1945, which killed about 40,000 instantly. The war ended on Aug. 15. Opposition to Abe's security bills, which have passed the lower house of parliament and are being debated in the upper house, remains strong, and Abe's support ratings have slid below 40 percent. Many with memories of the war and its aftermath are scathing about Abe's steps away from Japan's pacifist constitution in pursuit of a more robust security stance - a key policy goal - and his desire to adopt a less apologetic tone towards the war in Asia. A national group of atom bomb survivors criticised the government for forcing the bills through the lower house last month. "The longer discussion went on, the clearer it became that they were just trampling on the constitution and its renunciation of war and military strength," Nihon Hidankyo said in a statement. Abe attended the ceremony, echoing the call for an end to nuclear weapons. He plans to issue a statement marking the anniversary of the war's end next week, which critics fear will dilute past official apologies. -Reuters