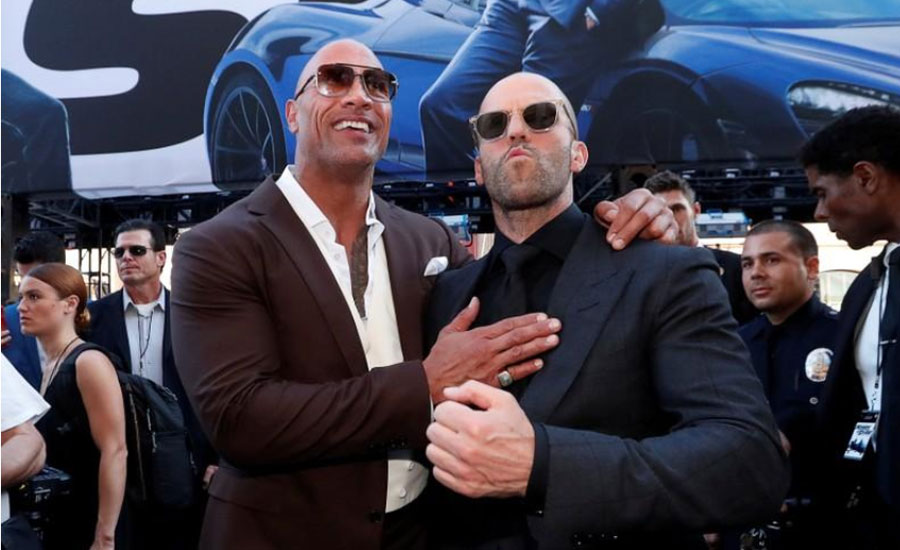 LOS ANGELES (Variety.com) - Universal’s “Fast & Furious Presents: Hobbs & Shaw” crossed the box office finish line in first place, debuting with $60.8 million from 4,253 North American locations.
The big-budget spinoff, starring Dwayne Johnson and Jason Statham, is expected to be an even bigger draw overseas, where the action franchise is hugely popular. “Hobbs & Shaw” kicked off internationally with a robust $120 million for a global start of $180 million. Though standalone vehicles aren’t always as muscular as official franchise sequels, “Hobbs & Shaw” will have to lure crowds across the globe throughout the dog days of summer to justify its sizable $200 million budget. The “Fast & Furious” series has generated over $5 billion worldwide across eight films. “We’re very thrilled with the global release, a tremendous start with a big market like China still to come,” said Jim Orr, Universal’s president of domestic distribution. Opening weekend crowds skewed expectedly male, with boys and men accounting for nearly 60% of tickets sold. “Hobbs & Shaw” enticed moviegoers young and old, as 50% of audiences were over the age of 25. Those who showed up this weekend were high on the action and thrills, awarding the film with an A- CinemaScore and a 90% audience rating on Rotten Tomatoes. Orr attributes the film’s “very broad appeal” directly to Jonhson and his massive fanbase. “[Director] David Leitch, The Rock and Jason Statham created an original and really thrilling adventure that complements the franchise tremendously well,” he said. Its $60 million domestic opening weekend marks the biggest bow for Johnson and Statham’s careers outside of the main “Fast & Furious” franchise. The $180 million figure also represents Universal’s fifth-highest grossing global launch ever, behind “The Fate of the Furious,” “Jurassic World,” “Furious 7” and “Fifty Shades of Grey.” In “Hobbs & Shaw,” the first spinoff in the “Fast & Furious” universe, Johnson’s Luke Hobbs and Statham’s Deckard Shaw unite to take down a genetically enhanced anarchist (Idris Elba). The star-studded cast also includes Helen Mirren and Vanessa Kirby. David Leitch, known for his work on “Deadpool 2,” directed the film, which was written by “Fast” vets Chris Morgan and Drew Pearce. Despite the new nationwide release, Sony and director Quentin Tarantino’s “Once Upon a Time in Hollywood” had a strong second weekend in theatres, placing third on domestic box office charts. The R-rated drama with Leonardo DiCaprio, Brad Pitt and Margot Robbie collected $20 million, marking a 51% decline from its inaugural outing. After 10 days of release, “Once Upon a Time in Hollywood” has made $78 million in North America. Meanwhile, reigning champ Disney’s “The Lion King” slid to the No. 2 spot with a solid $38 million. The hyperrealistic remake — directed by Jon Favreau — is the fourth Disney movie this year to cross $400 million in domestic ticket sales. With $430 million in North America and $1.19 billion internationally, “The Lion King” is now the second-biggest film of the year both domestically and globally. Sony’s “Spider-Man: Far From Home” landed in fourth place, generating $7.7 million to boost its North American haul to $360 million. The web-slinging superhero sequel has made $1.08 billion worldwide, including $715 million at the international box office. Rounding out the top five is Disney’s “Toy Story 4” with $7.2 million, taking the animated pic to $410 million at the domestic box office. Elsewhere, indie box office favourite “The Farewell” continues to fare well as it slowly expands to theatres across the country. A24’s comedic drama landed at No. 7, pocketing $2.4 million from 409 venues. The film, starring Awkwafina and directed by Lulu Wang, has amassed $6.8 million to date. Also at the speciality box office, Neon’s drama “Luce” brought in $132,916 when it debuted in five locations. Naomi Watts and Octavia Spencer lead the movie, which was directed by “The Cloverfield Paradox” filmmaker Julius Onah. As the end summer moviegoing season nears, domestic ticket sales are still down over 6% from last year, according to Comscore. Unless there’s a surprise hit in coming weeks, the North American box office might be free of blockbusters until Warner Bros. “It Chapter Two” scares some life into theatres in September.