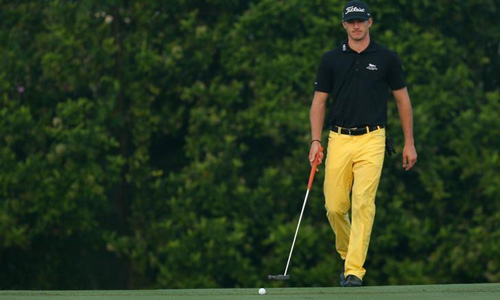 Overnight leader Morgan Hoffmann maintained his sublime form to take a three-shot lead at the halfway mark of the Arnold Palmer Invitational on Friday as Rory McIlroy and defending champion Matt Every moved into contention. Hoffmann followed his opening 66 with a sizzling seven-under-par 65 for a 13-under-par total of 131 at Bay Hill. "It's been fun out there. Just kind of being pretty mellow and trying to hit the middle of greens," said Hoffmann, a former junior ice hockey player and Oklahoma State University golfer ranked 137th in the world. Every had five birdies in a row from the fourth hole on his way to a 66 that vaulted him into second place at 134, a total matched by afternoon starters Harris English (66) and Sweden's Henrik Stenson, who birdied his last four holes for another 66. One shot further back was Ben Martin, who shot a 67 for 135. World number one McIlroy also had a streak of five birdies in his 66 that moved him to eight under par for the tournament alongside Sweden's David Lingmerth (67), Australia's Matt Jones (65) and South Korean Danny Lee, who fired a bogey-free 64. McIlroy, who next month would complete a career grand slam with a Masters win, started the day at the 10th and began his birdie blitz at the second hole. A bogey on his penultimate hole dropped him to 136. "I probably wasn't quite as consistent tee to green as I was yesterday," said McIlroy, who shot an opening 70. "But the putter is a great equalizer. "Was good to see some putts dropping, considering yesterday nothing really dropped for me," added the Northern Irishman, who took 34 putts in the first round. Hoffmann had his own birdie binge, sinking four in a row from the third after a bogey on the first and registered a blistering five-under 31 on the front nine. The 25-year-old Hoffmann finished with three birdies and a bogey on the homeward half. "I feel great," said Hoffmann, adding that he did not feel pressured as he seeks his first PGA Tour title. - REUTERS "I'm trying not to think about it. I know it will come eventually. If this is the week, so be it."