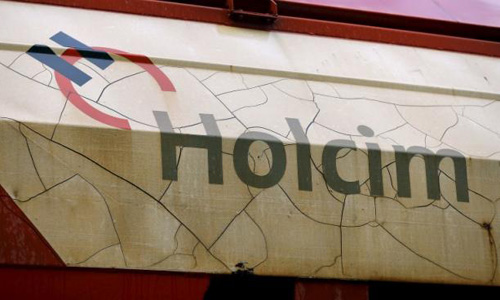 ZURICH - Holcim (HOLN.VX) looked at buying Germany's HeidelbergCement (HEIG.DE) towards the end of 2013 before agreeing to merge with France's Lafarge (LAFP.PA), a Swiss newspaper reported on Sunday, citing two sources. Then-Holcim chairman Rolf Soiron spoke with HeidelbergCement's biggest shareholder, Ludwig Merckle, who owns around 25 percent of HeidelbergCement shares through the family-run Spohn Cement, the SonntagsZeitung newspaper reported. "Right before the talks with Lafarge, Soiron discussed a merger with Heidelberg," the Swiss newspaper quoted one of the sources as saying. "Heidelberg declined it, though, because a merger among equals was not possible." A spokesman for Zurich-based Holcim declined to comment on the report. A spokesman for HeidelbergCement was not immediately available for comment. The tie-up between Holcim and Lafarge was announced in April 2014. Since then, the deal to create the world's biggest cement business has been thrown into doubt after Holcim shareholders raised objections to terms of the deal including the choice of chief executive. Holcim and Lafarge have now agreed a new share-swap ratio that is more advantageous to Holcim investors but some investors, including Holcim's second-biggest shareholder, are still calling for improved terms. It is also not yet known who will lead the merged company after it was agreed that Lafarge boss Bruno Lafont would no longer become chief executive of the combined company. Holcim investors against the deal have set up a website laying out their arguments. Holcim shareholders will vote on the deal at a meeting on May 8. - REUTERS