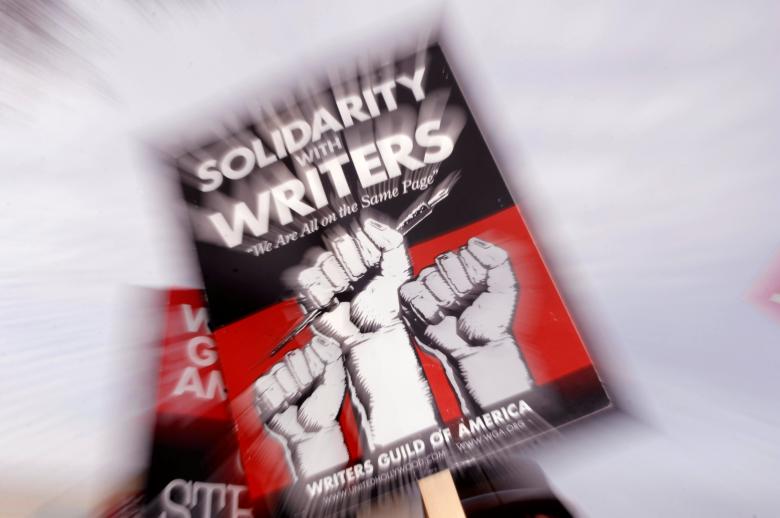 NEW YORK – 16Hollywood breathed a sigh of relief on Tuesday after movie and TV writers struck a tentative, 11th hour contract deal with major networks and studios, averting a second strike in 10 years.

The Writers Guild of America (WGA) and the Alliance of Motion Picture and Television Producers (AMPTP) announced the agreement on a new three-year accord a few hours before a strike was due to start.

The WGA told its 9,000 members in a memo they would together earn $130 million more over the lifespan of the agreement.

The Guild said it had made "unprecedented gains" on the thorny issue of compensation for shorter TV seasons - an issue since drama and comedy episodes have fallen from 22 per season to as low as eight. Until now, writers have been paid per episode and seen an average 23 percent drop in their pay in the last three years. The WGA said it also won a 15 percent increase in television royalties.

Members still need to agree to the settlement.

The Guild had won overwhelming 96.3 percent support for a stoppage and had set plans to picket TV and movie studios on Tuesday morning if no deal had been reached.

"See you at work tomorrow. Thanks for the 96.3%. Couldn't have done it without you," tweeted Shawn Ryan, writer and producer for TV series "The Shield" and "The Get Down."

Media analysts had said that any strike would further send audiences flocking to streaming services, such as Netflix Inc, Amazon.com Inc's and Hulu. These providers have revolutionized traditional TV with bold content, delivering all episodes at once, and which have vast libraries of film and TV shows.

Moody's Investors Service said in a note on Monday that it estimated the costs to the major media conglomerates of the accord would be between $100 million and $125 million for each of the three years and "would not likely present a considerable financial burden" on the companies.

A prolonged strike however, like the 100-day WGA stoppage in 2007 and 2008, would mean that "weaker media companies with limited financial flexibility could see their credit standing suffer," the Moody's report said.

The 2007-2008 strike cost the California economy an estimated $2.1 billion, according to the Milken Institute. –Reuters