Home comforts, but no pressure, for Walker in Texas 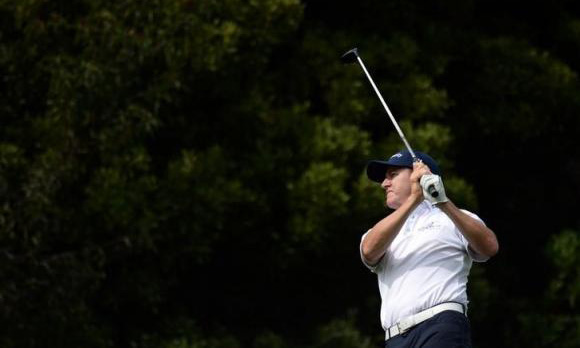 Home comforts, but no pressure, for Walker in Texas

TEXAS - The prospect of winning his home tournament at this week's Texas Open in San Antonio is tantalizing for Jimmy Walker but the American says he feels no extra pressure as he bids to claim a fifth PGA Tour title. Though the San Antonio resident conceded that he faced "a juggling act" with all sorts of personal requests from friends and family this week, he treated the tournament itself as just another very difficult challenge on the U.S. circuit. "I definitely don't feel any tighter," Walker told reporters while preparing for Thursday's opening round at the TPC San Antonio. "It's hard to win any week, let alone your home week, so I don't think you can really put it in perspective like that. "But it would definitely be a lot of fun. It would be fun to hear the cheers from the crowd, being from here, and have a chance to win on Sunday. It would mean a lot. "I live here, I've got lots of friends, lots of family. I know that they would all be there. It would be fun to have everybody run out and start popping champagne." Walker, who claimed his fourth PGA Tour victory at the Sony Open in Hawaii in January, readily admitted that preparations for the week had to be worked around off-course requests. "It's definitely more of a juggling act, I think, if you're at home, because everybody wants to see you," said the 36-year-old Oklahoma native. "They want to come out and you get requests for a lot of things. "So it's just a matter of trying to keep it all balanced and we've been doing a good job. It's definitely nice to be home. It does feel more relaxed." Walker will have to contend with a strong field at the TPC San Antonio where American world number six Jordan Spieth, his ninth-ranked compatriot Dustin Johnson and U.S. Open champion Martin Kaymer of Germany are all competing. Also set for the opening round is straight-hitting American Zach Johnson, a twice former winner of the Texas Open who has four wins in the Lone Star state. "I don't know what the rationale is, other than I'm comfortable with the golf courses," Johnson said of his successful record in Texas. "That's really what it boils down to. "You've got to hit it straight, you've got to rely on your putter, and I like that." - REUTERS