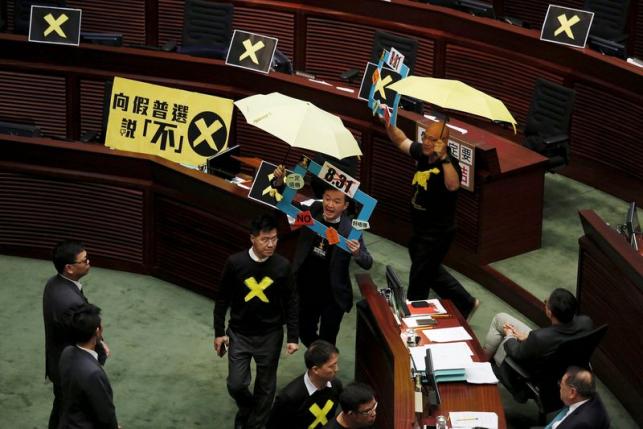 HONG KONG - The Hong Kong government gave lawmakers their first look on Wednesday at a long-awaited electoral blueprint for selecting the city's next leader, a plan that reflects China's desire for a tightly controlled poll despite calls for more democracy. The controversial government proposal follows huge pro-democracy protests last year in one of the greatest challenges to Beijing's Communist Party rule since the former British colony returned to Chinese control in 1997. Analysts said the blueprint, which lawmakers will vote on early in summer, could stir political tensions again after a lull of several months. However, Chief Executive Leung Chun-ying told reporters before the blueprint was officially tabled that the political climate in the city could be less accommodating in the future. "As of now, we see no room for any compromise," he said. "To initiate any political reform process is not easy. If this proposal is vetoed, it could be several years before the next opportunity," Leung said. Hundreds of flag-waving protesters gathered outside the Legislative Council. A large group waved Chinese flags in support of the proposal, saying Hong Kong must move forward. A smaller group held yellow umbrellas, which have become a symbol of the democracy movement. They demanded "true universal suffrage" and called for Leung to step down. Democratic lawmakers wearing yellow crosses on black shirts, some carrying yellow umbrellas, walked out of the chamber after the government's presentation. Tens of thousands of pro-democracy demonstrators blocked major roads in four key districts in the city last year, demanding Beijing grant a truly democratic vote and open nominations for Hong Kong's next chief executive in 2017. Their pleas were ignored and police forcefully cleared away the last of the protest encampments in mid-December. The blueprint for the proposal that the public vote on two or three candidates pre-selected by a 1,200 member pro-Beijing nominating committee was first outlined by China's parliament, the National People's Congress, last August. The Hong Kong government stood by that blueprint, offering no concessions to win over democratic lawmakers who have vowed to veto it when the government seeks formal approval. The opposition camp holds a one-third veto bloc, but Beijing-backed Leung said he remained hopeful that four or five democrats could be persuaded to change their minds. Democracy activists who launched last year's "Occupy" movement describe a vote without open nominations as "fake democracy". While Hong Kong is part of China, it is governed as a special administrative region, which means it has a different legal system and freedoms not permitted in the mainland. - Reuters