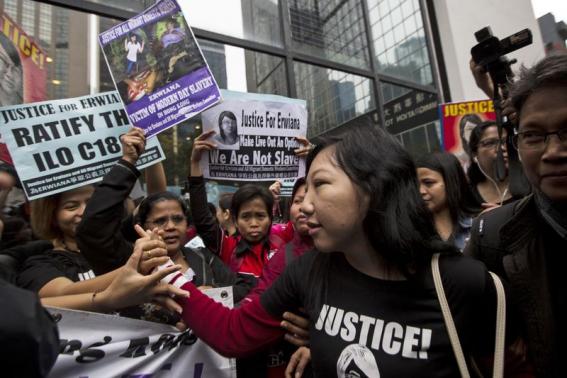 HONG KONG (Reuters) - A Hong Kong mother of two who punched her maids, beat them with mops and threatened to kill their relatives was jailed for six years on Friday in a case that triggered outrage and exposed the plight of millions of domestic helpers across Asia. Former beautician Law Wan-tung, 44, looked stunned as the sentence was passed after being found guilty of 18 of 20 abuse charges. She was also ordered to pay a fine of HK$15,000 ($1,934). The charges included inflicting grievous bodily harm and criminal intimidation against Erwiana Sulistyaningsih and an another maid, also from Indonesia. Law looked emotionless as she was led out of court. She had pleaded not guilty to the 20 charges but had admitted one of not buying insurance cover for her maid. Erwiana had told media she would forgive her former boss and her family. The brutality meted out to Erwiana has sparked calls for Hong Kong to revise its policies on migrant workers. Erwiana, who arrived in Hong Kong in 2013, returned to Indonesia in January last year where doctors said burns on her body were caused by boiling water. Photographs of a battered Erwiana posted online sparked outrage and Indonesia's then president, Susilo Bambang Yudhoyono, described her treatment as torture. Hong Kong has about 330,000 foreign domestic helpers, most of them from the Philippines and Indonesia and nearly all women, who can earn more in Hong Kong to send back to their families than they can at home. They earn a small fraction of the minimum wage and are forced to live with their employers, often in tiny apartments. Human rights groups say they often suffer physical and emotional abuse, including sexual assault.