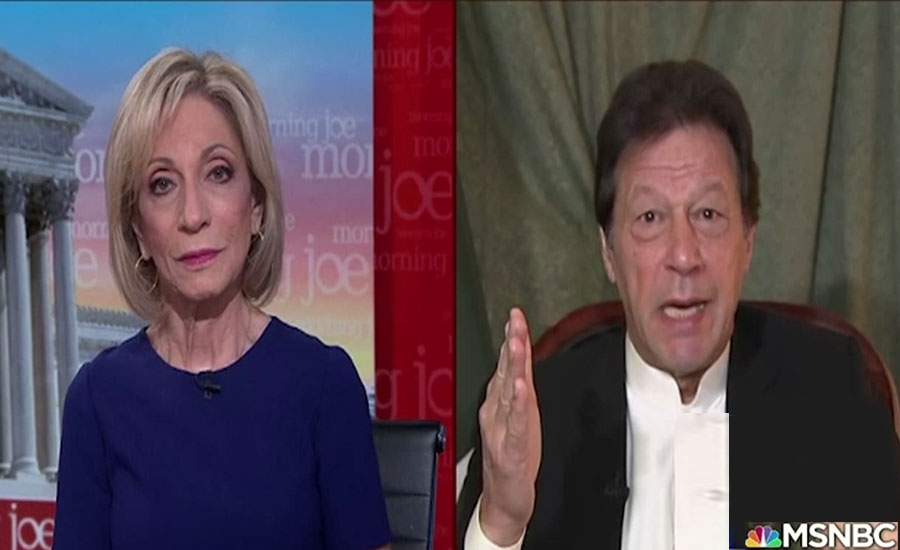 NEW YORK (92 News) – Prime Minister Imran Khan has said that Donald Trump is the president of the most powerful country and he will definitely intervene in the human tragedy in Indian Occupied Jammu and Kashmir (IOJ&K). In an interview with MSNBC, an American TV, on Thursday, he said that no sane person can think of a nuclear war. “I think that there is need to stop the affairs headings to the dangerous direction. I fear a massacre soon after lifting of curfew in Occupied Kashmir. For this reason, I am demanding mediation of Trump,” he said. Prime Minister Imran Khan said that the condition will go out of control if the matter was not intervened. “I have visited the United Nations to apprise the international community of the threat,” he said. The prime minister said that the war is not a solution to any issue and for this reason, he is opposed to it. He said that he had talked to Trump who thinks he (Imran Khan) should play role to reduce tension between Iran and America. “Pakistan and the United States of America (USA) enjoy the best relations during the last two decades,” he said. Imran Khan said that the Pak-US relations are based on truth and confidence this time. Addressing High-Level Dialogue on Financing for Development on the sidelines of 74th Session of the UNGA in New York, Prime Minister Imran Khan said that the West should do more to treat the plundered money from developing countries in the same way as it treats drug money or terror financing. He said illicit financial flows devastate the economies of developing counties. “People in rich world do not realize the impact it is having on causing poverty, destruction and lack of human development in the developing world.” The prime minister said that when his government took power, it inherited a huge debt and in the previous 10 years it was increased by four times due to corruption of the political elite. “Most of the plundered money was laundered and sent abroad to invest in foreign bank accounts, properties in western capitals and offshore accounts.” Imran Khan said: “We have been trying our best to retrieve the looted money but our efforts are hampered by legal lacunas and other issues in this process. Had that money spent on education, health and other facilities of life for public, the quality of life would have significantly been improved in our country.” The prime minister regretted that there is a lack of political will in the richer countries to help return the wealth plundered by corrupt politicians of developing world. “It not only deprives a developing country of its vital resources, but it is also not a deterrent against corruption. So, corrupt elite from poorer countries invests the looted money in advanced world without any fear of accountability,” he said. Imran Khan said no matter what aid goes from richer countries to poorer countries is minuscule in comparison with the money looted by corrupt elements and stashed in offshore accounts. “I don’t understand why in this age there are offshore tax safe heavens? Why are we protecting even rich countries? Why do they protect those people who avoid taxes? Especially in our countries, we are plundered by these elites,” said Prime Minister Imran Khan.