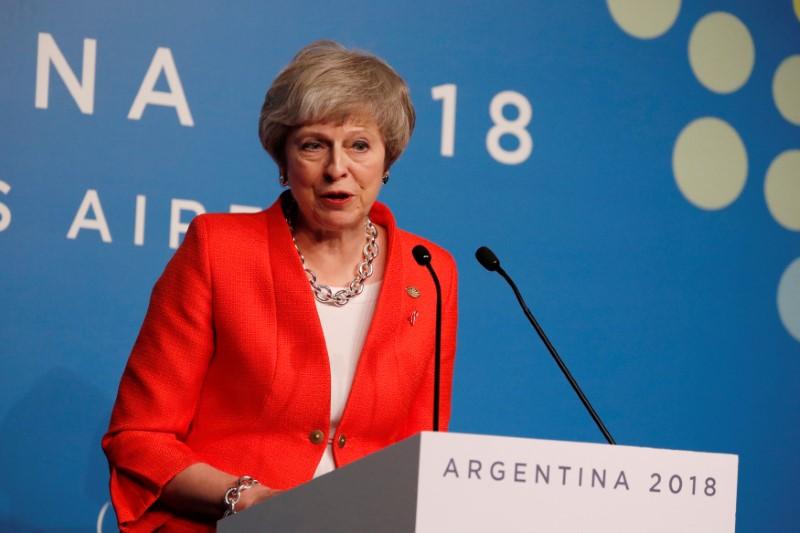 LONDON (Reuters) - Several world leaders are keen to strike trade deals with Britain once the country is out of the European Union, Prime Minister Theresa May will say on Monday, pressing the case for her Brexit deal before a fateful Dec. 11 vote in parliament. May is facing an uphill struggle to get MPs to back her deal to keep close economic ties with the bloc, which she agreed with the EU in November. The Labour Party says it will seek a vote of no confidence in the government if May loses the vote. The pact has been criticised within May’s own party, both by supporters of a cleaner break with the EU and by opponents of Brexit. A Northern Irish party which props up her minority government has said it will vote against it. After visiting Argentina for a G20 summit, May will say her meetings with leaders showed that several countries were ready to negotiate trade deals “as soon as possible”. Swift new trade deals are a major demand for Brexit campaigners. “Once we leave the EU, we can and we will strike ambitious trade deals,” May will tell parliament, according to excerpts of her speech. “For the first time in more than 40 years we will have an independent trade policy, and we will continue to be a passionate advocate for the benefits open economies and free markets can bring.” She will say that she had meetings with leaders keen to strike trade deals, including the hosts Argentina, Australia, Chile and Japan. With Japan, Britain wants to work quickly to set up a new arrangement based on Japan’s existing partnership agreement with the EU, she will say. The government says that if May’s deal is voted down there is a risk Britain will exit the EU with no agreement at all, with serious potential economic consequences. Some opponents of Brexit have campaigned for a new referendum giving voters the option to reverse Britain’s 2016 vote to leave the bloc, although the government says no such new vote will be held.