Houthis take over US-trained special forces base in Sanaa 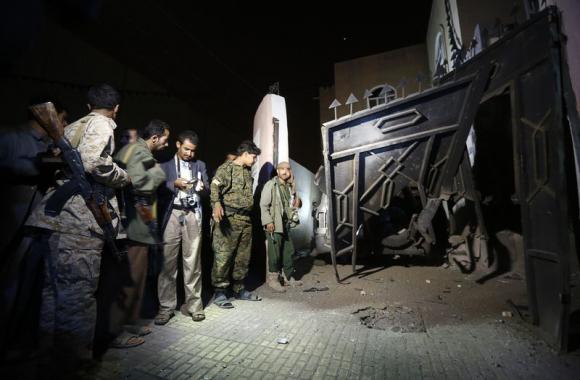 Houthis take over US-trained special forces base in Sanaa

SANAA (Reuters) - Armed men from Yemen's newly dominant Houthi group took over a special forces army base in the capital Sanaa early on Wednesday, soldiers there said. The clashes, which lasted around six hours, started late on Tuesday when Houthis shelled the camp with heavy weapons, soldiers from the camp said. At least 10 people were killed. The troops had been trained and equipped by the United States as an elite counterterrorism unit during the rule of ex-president Ali Abullah Saleh, who was ousted by Arab Spring protests in 2011, military sources told Reuters. Houthi militiamen seized Sanaa in September, eventually leading President Abd-Rabbu Mansour Hadi to flee to Aden this week where he seeks to set up a rival centre of power. For more than a decade the United States has watched with alarm as Al Qaeda in the Arabian Peninsula - the most powerful arm of the global militant group - has grown in Yemen as the political chaos has mounted. The US military trained and kitted out Yemeni soldiers under Saleh, and under Hadi the CIA has stepped up drone strikes aimed at killing suspected militants. US officials have expressed concern that the rule of the resolutely anti-American Shi'ite Muslim Houthis will harm their counterterrorism efforts in a country that shares a long border with Saudi Arabia, the world's oil exporter. Yemen's Sunni Gulf neighbours have decried the Houthi takeover as a coup, and the head of the Gulf Cooperation Council Abdullatif al-Zayyani arrived in Aden to meet Hadi on Wednesday, political sources there said. The power struggle between the Houthis in Sanaa and Hadi in Aden casts more doubt on U.N.-sponsored talks to resolve Yemen's crisis peacefully, and exacerbates sectarian and regional splits which may plunge the country into civil war. The Houthis said on Tuesday that Hadi had lost his legitimacy as head of state and was being sought as a fugitive from justice.