How many Palestinians have to die for their lives to matter? Congresswoman Rashida Tlaib 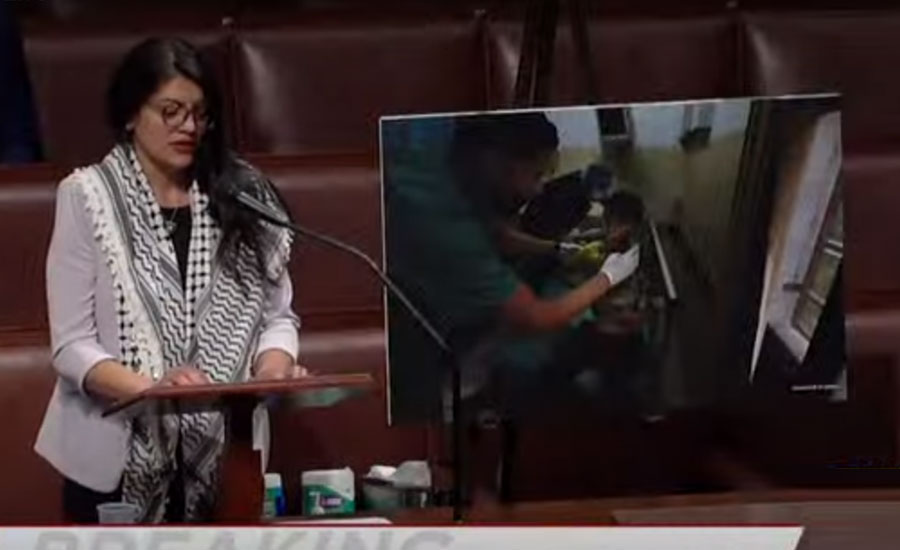 How many Palestinians have to die for their lives to matter? Congresswoman Rashida Tlaib

WASHINGTON – After more than 11 Palestinians, including 35 children, were killed in airstrikes by terrorist Israel, Palestinian American Congresswoman Rashida Tlaib asked “how many Palestinians have to die for their lives to matter?”

She along with several other progressive Democrats, spoke out Thursday to condemn Palestinians 'being killed as the world watches' and the lack of recognition by US leaders of the Palestinians’ suffering at the hands of Israel.

In a speech on the House floor, Tlaib, said she was “a reminder to Congress that Palestinians do indeed exist, that we are human.”

“And colleagues, Palestinians aren’t going anywhere no matter how much money you send to Israel’s apartheid government,” Tlaib added, referring to the $3.8 billion in annual military aid that Congress sends to Israel.

“It is our duty to end the apartheid system that for decades has subjected Palestinians to inhumane treatment and racism,” Tlaib added, referencing Human Rights Watch’s recent report accusing Israel of committing crimes of apartheid and persecution against Palestinians.

Palestinians are “still suffering, still being dispossessed, still being killed as the world watches and does nothing,” Tlaib said.

Tlaib called out the lack of recognition of Palestinian suffering by US government leaders, including by President Joe Biden, Secretary of State Antony Blinken and leaders of both parties.

“To read the statements... you’d hardly know Palestinians existed at all,” Tlaib said, adding that “there has been no recognition” of the displacement of Palestinians in East Jerusalem or of “Al-Aqsa being surrounded by violence, tear gas, smoke while people pray.”

“No child, Palestinian or Israeli, whoever they are, should ever have to worry that death will rain from the sky. How many of my colleagues are willing to say the same, to stand for Palestinian human rights as they do for Israeli?” Tlaib said. “How many Palestinians have to die for their lives to matter?”

Mark Pocan said that Hamas’s “missile attacks should be condemned, but that doesn’t make it a ‘both sides’ issue,” adding that “we must acknowledge and condemn the disproportionate discrimination and treatment that Palestinians face.”

Ayanna Pressley called out the “grave asymmetry of power” between Israel and the Palestinians, saying that “as a Black woman in America, I am no stranger to police brutality and state-sanctioned violence,” adding that Palestinians are “told the same thing as Black folks in America: There is no acceptable form of resistance.”

Alexandria Ocasio-Cortez said that the US “must acknowledge its role in the injustice and human rights violations of Palestinians,” saying it is “not about both sides; this is about balance of power.”

Cori Bush said that if Congress “is looking for something productive to do” with billions of dollars in aid, “I have some communities in St. Louis County where that money can go.”

Betty McCollum condemned Hamas’s actions as well as Israel’s occupation of Palestinian territory, and criticized the “unconditioned” military aid that the US sends to Israel. How many of my colleagues are willing ... to stand for Palestinian human rights as they do for Israeli? –Media Reports