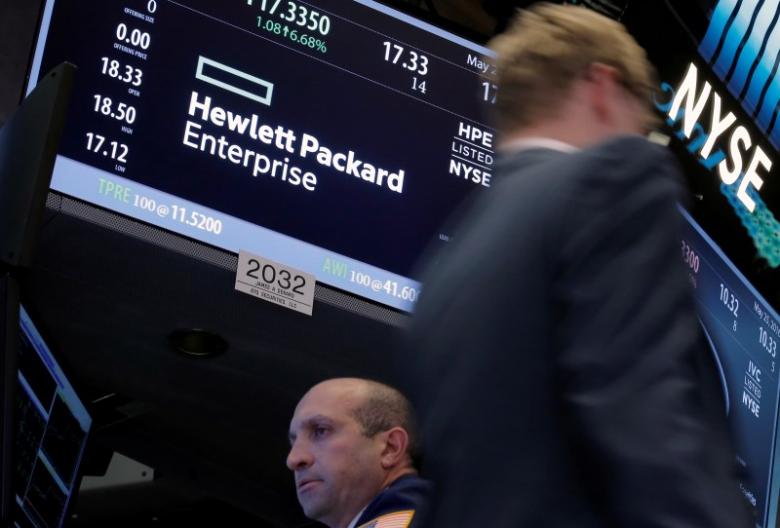 NEW YORK - Hewlett Packard Enterprise Co will spin off and merge its non-core software assets with Britain's Micro Focus International Plc in a deal worth $8.8 billion, the companies said. The move is part of HPE Chief Executive Meg Whitman's plans to shift HPE's strategy to a few key areas such as networking, storage and technology services since the company separated last year from computer and printer maker HP Inc. "With today's announcement, we are taking another important step in achieving the vision of creating a faster-growing, higher-margin, stronger cash flow company well positioned for our customers and for the future," Whitman said in a statement. The deal with Micro Focus, a multinational software company based in Newbury, United Kingdom, was announced along with HPE's latest quarterly earnings. In the third quarter, HPE reported net revenue of $12.2 billion, down 6 percent from $13.1 billion a year earlier. The deal comes on the same day Dell and EMC Corp completed their merger in a deal that unites two of HPE's biggest rivals. The transaction is expected to be tax free to HP. Micro Focus will pay $2.5 billion in cash to HPE, while HPE shareholders will own 50.1 percent of the combined company that will operate under the name Micro Focus and be run by its executives. HP said it would pay $700 million in one-time costs related to the separation of the assets. AUTONOMY GOES BACK TO BRITAIN In the deal, HPE is sending one of the British firms it acquired back to where it started. HPE acquired part of its software portfolio through the $10.3 billion purchase of Britain's Autonomy Corp Plc in 2011. HP's $11 billion purchase of Autonomy was supposed to form the central part of the U.S. group's move into software. HP later wrote off three-quarters of the company's value, accusing Autonomy executives of financial mismanagement. Other HPE assets that will be merged include software for application delivery management, big data, enterprise security, information management & governance and IT Operations management businesses. HPE's software revenue growth has been challenged by a market shift toward cloud subscription services. It had earlier been in talks with private equity firms to sell the software unit for between $8 billion and $10 billion. Micro Focus, with a market capitalization of 4.45 billion pounds ($6 billion), has been bulking up on acquisitions to boost growth, and this would be its largest deal to date. Earlier this year, Micro Focus acquired U.S. firm Serena Software for $540 million. Kevin Loosemore, executive chairman of Micro Focus, said that "the time is right for consolidation in the infrastructure software market and this proposed merger will create one of the leading players in this space." HPE is the latest firm looking to Britain for expansion opportunities after the United Kingdom voted to leave the European Union. Valuations of British companies have been relatively low given current exchange rates. HPE announced one in May that it had merged its call centre and services unit merged with Computer Sciences Corp to create a $9 billion company. The merger with Micro Focus was first reported by Sky News. -Reuters