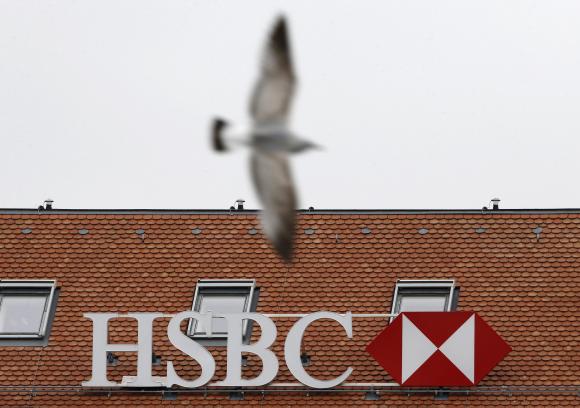 LONDON (Reuters) - HSBC reported a 17 percent fall in annual pretax profit and cut its profitability target, saying allegations its Swiss business had helped customers to dodge taxes had brought shame on the bank. Results from Europe's biggest bank on Monday reflected the cost of past misconduct and of protecting itself against the impact of further scandals. HSBC said allegations about its Geneva-based arm, raided last week by Swiss officials and now the subject of a UK inquiry, had badly damaged its image. "A number of us, myself included, think the practices of the private bank back in the past are a source of shame and reputational damage to HSBC. I think shame would be reasonable noun to use," Chief Executive Stuart Gulliver told reporters. Gulliver was himself thrust into the centre of the scandal on Sunday when Britain's Guardian newspaper said he had sheltered millions of pounds in HSBC's Swiss private bank via a Panamanian company. HSBC confirmed that Gulliver has a Swiss bank account and while there is no suggestion he broke any rules, the revelations come at a sensitive time. HSBC's chairman Douglas Flint is due to appear before British lawmakers on Wednesday to answer questions about the bank's alleged complicity in tax evasion. Gulliver is among the highest paid bank executives in Europe with a pay packet last year amounting to 7.6 million pounds. This is down from 8 million in 2013 after his bonus was cut to reflect the bank's failure to stamp out misconduct. HSBC's pretax profit of $18.7 billion (£12.1 billion) for 2014 was down from $22.6 billion the year before and below the average analyst forecast of $21 billion, after a $3.7 billion bill for provisions, fines and settlements arising from a range of misdeeds, including attempted manipulation of foreign exchange markets. With the U.S. Department of Justice yet to finish its forex probe, HSBC added an extra $550 million to cover future forex-related fines and warned it could face a $500 million bill to compensate U.S. customers sold debt protection products. Shares in the bank fell nearly 6 percent, their biggest intra-day drop since November 2011, to hit a near 2-1/2 year low. By 1217 GMT they were down 5.9 percent at 569.4 pence. "For all the recent media furore around potential conduct issues, it is the 'underlying' performance which, we believe, should be the greatest cause of investor concern, right across revenues, costs and impairments," said Ian Gordon, analyst at Investec, which rates HSBC as a "hold". RETURN ON EQUITY Gulliver, appointed CEO in 2011, has sold or closed 77 businesses and axed over 50,000 jobs to try and simplify HSBC's sprawling business and boost earnings after higher capital requirements imposed since the financial crisis make it more difficult for large banks to make a profit. Gulliver said the job was far from done, but rejected some calls from regulators or investors for breaking up big banks such as itself or JPMorgan (JPM.N). "We're still on a journey to simplify the firm ... and I don't rule out that we might make more disposals. "But I don't think the firm is too big to manage. You can see the validity of the business on the revenue side, even if the cost of running (a big bank) has clearly gone up," he said. HSBC has increased the amount of capital it holds to absorb potential losses by over 60 percent since before the crisis. Gulliver said the bank intended to increase its core capital to between 12-13 percent from 10.9 percent currently, to give it enough reserves to deal with regulators' demands The bank cut its target for return on equity to more than 10 percent in the next 3-5 years from 12-15 percent, originally set in 2011. This measure of profitability fell to 7.3 percent in 2014 from 9.2 percent in 2013. Gulliver said the bank needed to improve profitability in Latin America, Turkey and the United States, and in areas of its commercial and investment bank. Before the financial crisis returns in excess of 10 percent were the norm for large banks. Group revenues were stable and the bank's commercial banking division generated record profits but its global banking and markets division, which includes HSBC's investment bank, reported a 38 percent drop in profits due to lower revenues and higher costs. Underlying operating expenses were $37.9 billion in 2014, up 6.1 percent from 2013, showing the struggle Gulliver is having to lower costs in the face of tougher regulation and the need for more compliance staff. That continues to depress returns. It paid or set aside $3.4 billion on items such as the forex fine and compensation for UK customers mis-sold insurance products.