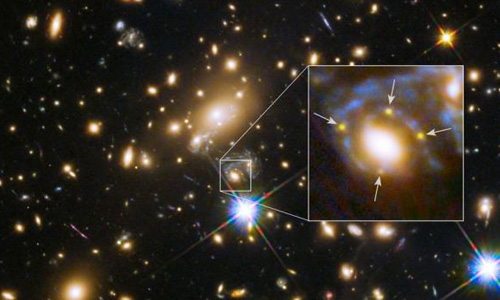 CAPE CANAVERAL - Astronomers using the Hubble Space Telescope and a naturally occurring cosmic magnifying lens captured surprising multiple images of the same exploded ancient star, research published on Thursday shows. The four images captured by Hubble were caused by light taking different paths around a massive galaxy cluster located between the exploded star and the Earth-orbiting telescope. The cluster’s gravity causes passing photons, or particles of light, to bend, a phenomenon predicted 100 years ago by physicist Albert Einstein. Astronomers have been taking advantage of so-called “gravitational lensing” to boost Hubble’s imaging powers and peer farther back in time. By chance, the supernova, which exploded about 9 billion years ago, was aligned with the intervening galaxy cluster being used during a Hubble observation period in 2011. Scientists returned to the images in November to look for supernovae and found the quadruple rendering, a configuration known as an Einstein cross. “The supernova team was looking at these image and bam, up popped not one, not two, not three, but four images,” said astronomer Jennifer Lotz, with the Space Telescope Science Institute in Baltimore, Maryland. “ They were incredibly lucky.” The object, known as Supernova Refsdal in honour of Norwegian astronomer Sjur Refsdal, is the first detected multiply imaged supernova. It appears about 20 times brighter than its natural brightness due to the combined effects of two overlapping lenses, said Jens Hjorth with the Dark Cosmology Center in Denmark. The light from the supernova will fade as the explosion tapers off, but due to additional warping of its light by the galaxy cluster, astronomers expect a re-run. "The four supernova images captured by Hubble appeared within a few days or weeks of each other and we found them after they had appeared," Steve Rodney, with Johns Hopkins University, said in a statement. "But we think the supernova may have appeared in a single image some 20 years ago elsewhere in the cluster field, and, even more excitingly, it is expected to reappear once more in the next one to five years,” he added. “At that time, we hope to catch it in action." The research appears in this week's issue of the journal Science. –Reuters