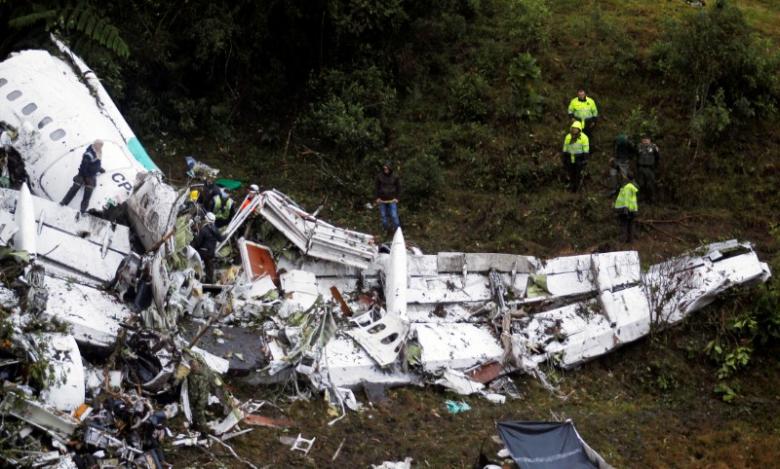 BOGOTA - Errors by the pilot, airline and Bolivian regulators are to blame for a plane crash in Colombia that killed 71 people last month, including most of Brazil's Chapecoense soccer team, Colombia aviation authorities said. The plane, operated by Bolivia-based charter company LaMia, crashed on a wooded hillside near Medellin because the pilot failed to refuel en route and did not report engine failures caused by the lack of fuel until it was too late, officials said. "No technical factor was part of the accident, everything involved human error, added to a management factor in the company's administration and the management and organization of the flight plans by the authorities in Bolivia," Colombia's Secretary for Air Safety Colonel Freddy Bonilla told journalists. Aviation authorities in Bolivia and the airline "accepted conditions for the flight presented in the flight plan that were unacceptable," Bonilla added. Besides a lack of fuel, the plane was over its weight limit by nearly 400 kilograms (881 lbs) and was not certified to fly at the altitude at which the journey took place, Bonilla said. The preliminary conclusions of Colombia's investigation coincide with assertions by Bolivian authorities last week that LaMia and the plane's pilot were directly responsible for the accident. Pilot Miguel Quiroga was also a co-owner of the airline and was killed in the crash. Gustavo Vargas Gamboa, LaMia's chief executive, was jailed pending trial earlier this month on manslaughter and other charges, which he has denied. His son Gustavo Vargas Villegas, a former official with Bolivia's aviation authority, is also being held on charges that he misused his influence in authorizing the license of the plane that crashed. He also says he is innocent. Criminal charges have also been brought against LaMia co-owner Marco Antonio Rocha Benegas, whose whereabouts are unknown, and air traffic controller Celia Castedo, who fled Bolivia after the crash and is seeking asylum in Brazil. Bolivian authorities have said the crash was an isolated incident, but that the government will accelerate the process of implementing a new safety system. Colombian investigators have the final word on causes of the crash, Bolivian authorities have said. The aircraft had been transporting the Chapecoense team to the biggest game in its history, the final of the Copa Sudamericana. All but three of the players and staff onboard were killed. Two crew members and one reporter also survived. -Reuters