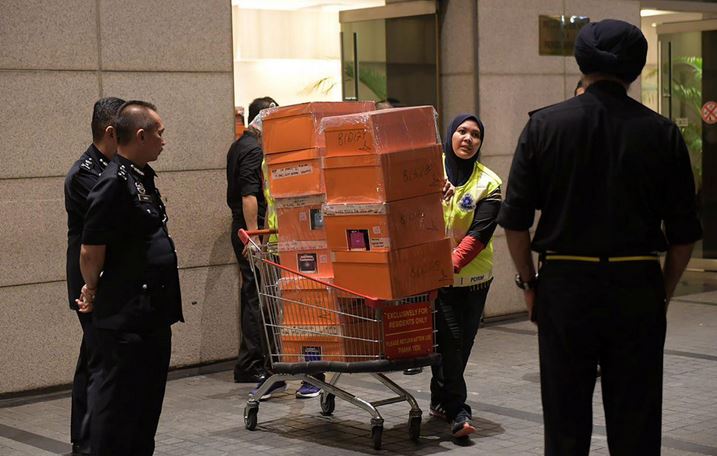 KUALA LUMPUR (Reuters) - Malaysian police seized 284 boxes of designer handbags and dozens of bags filled with cash and jewellery on Friday from a luxury condominium in the centre of Kuala Lumpur linked to former prime minister Najib Razak. Police have been searching Najib’s home and other places linked to him as part of an investigation into the scandal-plagued state fund 1Malaysia Development Berhad (1MDB), an extraordinary turn of events that few would have predicted before a May 9 general election that he was expected to win. Items such as Birkin handbags from Hermes, jewellery, watches and other valuables were carted out of the condominium at the upmarket Pavilion Residences, in the pre-dawn hours, police said. “Exactly how much jewellery, I would not be able to say, because we know that we confiscated bags containing jewellery and the number of jewellery is rather big,” Amar Singh, director of police commercial crime investigations, told reporters at the scene. Shortly after Najib and his long-ruling political coalition were defeated in the polls, new Prime Minister Mahathir Mohamad barred him and his wife, Rosmah Mansor, from leaving the country. Mahathir, 92, who was once Najib’s mentor, says there is sufficient evidence to investigate the multi-billion-dollar scandal at the 1MDB fund that Najib founded. Authorities in six countries, including the United States, are investigating the fund. Najib denies any wrongdoing. His lawyer denounced the long search of Najib’s home as “harassment”. Critics of Najib have often accused his wife of lavish spending, which they say was done with public funds. Rosmah’s alleged excesses included designer handbags, watches and jewellery, which she bought while travelling around the world, have been widely reported, although she has never spoken about it herself.

The US Justice Department said last year in a filing in a civil lawsuit that nearly $30 million of funds stolen from 1MDB was used to buy jewellery for Rosmah, including a rare 22-carat pink diamond set in a necklace. Singh said police carried out simultaneous searches at six premises linked to Najib, all in connection with their investigation into 1MDB. The premises include the prime minister’s office and official residence in the administrative capital of Putrajaya, the family mansion in Kuala Lumpur where Najib lives, and three other private residences linked to him. “This is the result of the search in one of the six premises,” Singh said, pointing to the hundreds of luxury items seized from the condominium. Singh said police had also seized documents linked to 1MDB. Stories of lavish spending by Najib’s family have long been a sore point for Malaysians. A prime minister earns a fixed salary of 22,826.65 ringgit ($5,7500) a month and cannot invest in businesses or stocks while in office. Najib earned an additional monthly salary of 16,000 ringgit as a member of parliament.